Dame Laura still showing the kids how to have fun

Laura Davies has been chalking up the accolades of late after a glittering career that has reaped 4 major titles among 84 titles and counting, world-wide.

She was named Dame Commander of the Order of the British Empire in last year’s Queen’s Birthday honours and is about to receive two of the greatest accolades the game can bestow – induction to the World Golf Hall of Fame (alongside our own David Graham) at St Andrews on July 13. 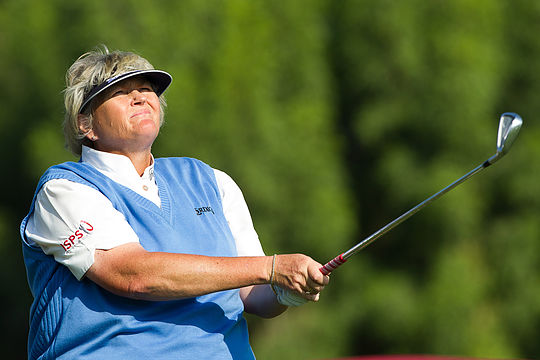 She has also been named recently alongside Princess Anne and Annika Sorenstam as one the first three female members of the Royal And Ancient Golf Club of Andrews.

She may also be on the short list of candidates for the fictional gong: ‘Services to the downright Refreshing if somewhat Unconventional’, when it comes to her preparation for tournament play.

It may be a stretch to suggest Davies would need a compass and blood hounds to find the practice range at most events but at the just completed RACV Ladies Masters, Dame Laura was particularly delighted to engage in an alternative means of ‘preparation’ in the minutes preceding her third round.

As the clock ticked down to her tee time with her younger colleagues nearby focussed intently on their last minute putting rituals after at least an hour spent on the range beforehand, there was the Hall of Fame inductee and her caddy, playing soccer golf with spectators on the Royal Pines’ lawns.

She was at it again immediately following her final round on Sunday, instantly drawing a crowd of curious onlookers, many of whom took the opportunity to grab a photo and an autograph with the ever obliging English legend.

It’s fair to say the proprietors of the attraction could scarcely contain their excitement.

Modern golf instructors may frown but the 51-year old’s longevity in the game – for instance, she has played in every Ladies Masters at Royal Pines since 1992 – and the methods she employs that have kept her in the game at this level for such an extended period are to be admired.

Even a fraction of Davies’ success and enjoyment of life would be among many things they’d also wish for their paying clientele as their careers’ progress.