Daniel Bringolf withheld a late charge from Brady Watt to win the Federal Amateur in Canberra with a 10-under-par total for a three stroke win.

Bringolf went into the final day with a four stroke buffer over Chris Brown after earlier rounds of 69-67. 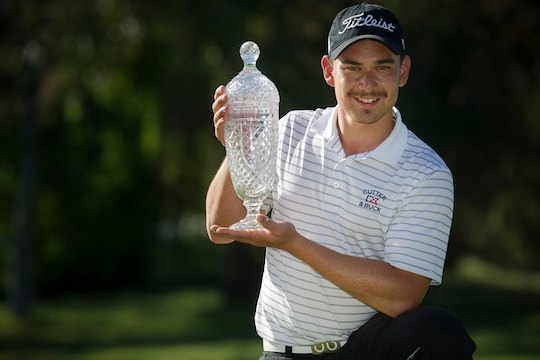 Closing rounds of 69-73 were enough to get the job done for Bringolf, who had troubles off the tee in the closing round.

“I drove the ball average today, but was able to keep my score with my short game,” said Bringolf, who plans to head to Asian Tour school next month.

“It was not easy out there and this is a tough course where you have to pick your line from the tee. I was lucky to have my short game save me today, and it is great to win an event like this.”

This year’s tournament format had the final day contested over 36-holes and Bringolf was quick out of the blocks with a morning round of 69. 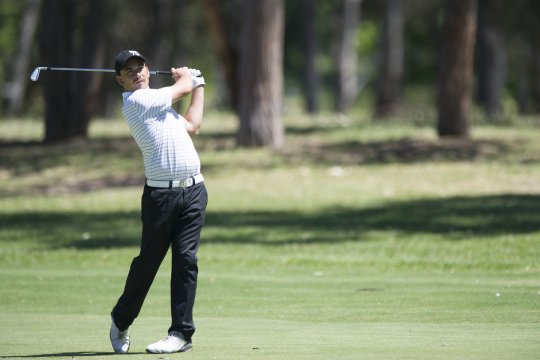 Daniel Bringolf fires into the 18th at Federal during the final round of the Federal Amateur in Canberra (Photo: Anthony Powter)

This was another fine performance from the Keperra Bowl champion and with the 22-year-old recording so far this season a win in Brisbane, a runner-up in the Western Australian Open and runner-up at the Federal, Watt is certainly progressing to become one of our main amateurs.

“I just want to keep climbing the rankings and my results over the last three events are very pleasing. I have the Dunes Medal, Aussie qualifying and Victoria Amateur ahead and my game is heading in the right direction.”

Bringolf headed into the afternoon eighteen with a five shot buffer but when a snap hook on Federal’s short par 4, 350 metre 15th went out of bounds resulting in a double bogey, Bringolf needed to consolidate his round as Watt was closing.

A solid 9 iron into the centre of the green on the 135 metre 16th resulted in par and Bringolf was then able to bring the event home despite a bogey Federal’s 18th – which at 420 metres and a dog-leg uphill is arguably one of the toughest finishing holes in world amateur golf.

“I was a little untidy there in parts but stuck to my game plan,” said Bringolf.

“This is a great tournament and the course was presented in good condition. You were rewarded for quality shots, yet punished for poor ones.”

Royal Melbourne’s James McMillian had another fine amateur tournament finishing in 3rd position at 6-under, after rounds of 67-75-72-68.