Fox finished runner-up to Brett Rumford at the WA PGA last week and celebrated his 39th birthday earlier in the week with a 25-foot birdie putt on the 72nd hole, capping off what has been a pretty special two weeks at home in the West. 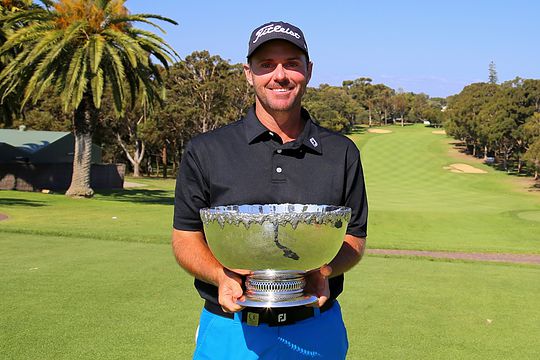 “I’m not sure really, emotions are everywhere at the minute. Very pleased, of course it was a tough day. Obviously, it was just head down, bum up all day just trying to play in the weather,” said Fox, who completed the four rounds at 11-under 277.

“It sort of hit me in a rush late in the round, that the scoreboard had changed dramatically. I thought I was a couple behind then all of a sudden I was in front.”

“I led during the day, I lost the lead and then having to stay with it and try and pick up the shots. It wasn’t until the 17th where I realised I was leading so that sort of experience is something I’ll hold true and go from there”.

“Standing on 18 I had a look at the leaderboard and saw a two-shot lead and I was thinking ‘I hope that’s actually what it is’, I might need all three of them to try and get it in here.”

“And then to hole it was just a dream, thank God that’s over.”

Luck, from Perth’s Cottlesloe club, looked set to steal the championship when he raced to 6-under for the round through 12 holes but fell away towards the end. Despite the disappointment in not winning, the positives far outweighed any negatives for the talented youngster.

“I put up a pretty good effort, especially in that last round out there, I just wasn’t able to finish it off, I didn’t hit the shots I needed to, but extremely happy with the second (place finish), I would have taken that at the start of the week, so I’m really happy.”

“Just a couple of poor golf shots down the last few didn’t pan out my way, and unfortunately they just resulted probably worse that what they should have.”

Sharing third place three strokes behind Luck was the quartet of Mitchell Brown, Jason Scriverner, Aaron Pike and Daniel Valente at 5-under, with Michael Sim in seventh place at 4-under.

The Tour returns to the East Coast in a fortnight for the staging of the NSW Open at Sydney’s Stonecutters Ridge Golf Club from November 12-15.