Daniel Hoeve will take a four stroke lead into the final round of the Golf SA Amateur Classic being played at Glenelg Golf Club in Adelaide.

Hoeve has fired rounds of 68-71-70 to be at 4-under-par with Queensland’s Aaron Wilkin his nearest rival at even-par in outright second position. 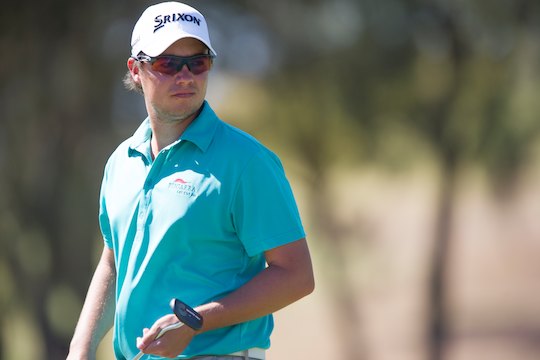 Daniel Hoeve has fired rounds of 68-71-70 to be leading the Golf SA Amateur Classic at Glenelg Golf Club in Adelaide (Photo: Anthony Powter)

Nathan Holman is at 1-over-par for the tournament and in third position, five behind Hoeve.

Hoeve is seeking to win his first main amateur title after being runner up to Jordan Zunic at the Tasman Open early in the year. With top-15 finishes at the Master of the Amateurs, Western Australian Open and Keperra Bowl, a win would be timely for Hoeve who is the top-ranked amateur in this week’s field.

“I have been hitting fairways and greens and the scores reflect that,” said Hoeve, ranked 41st in the world according the to R&A World Rankings.

“It is great to be in this position with a chance to win and I am confident that my game can withstand the pressure with being in the final group.”

Glenelg is a testing course and reducing the four shot buffer Hoeve presently enjoys presents a challenge for his rivals. Just twelve players today broke the par-71 layout, with the day’s best round being a 68 from Simon Vitakangas and Todd Sinnott.

“I will play conservative on the holes you need to be careful,” says Hoeve. 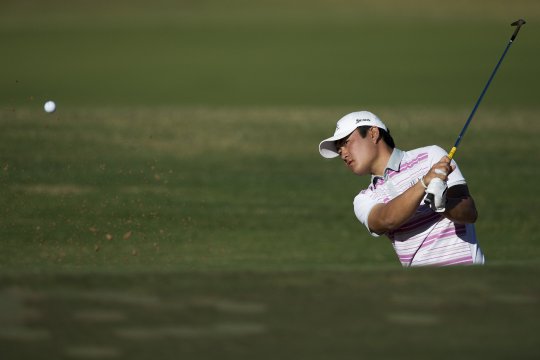 Ricky Kato escapes from the 13th greenside bunker during the third round of the Golf SA Amateur Classic at Glenelg Golf Club in Adelaide (Photo: Anthony Powter)

“There are some holes you can be more aggressive on, like some of the short par-4′s, yet the way this course has been set up and with the pin locations, you cannot short side yourself and put the ball in the wrong spot.”

You would have to think any player more than five from the leader will struggle to make inroads during tomorrow’s final round, especially with how well Hoeve is playing.

With ‘Sunday’ pin placements guaranteed and from previous years with the manner Glenelg’s ground staff have set the course up, pars will be a premium, birdies a scarcity.

“You have to expect that,” says Hoeve who is keen to progress his world ranking as high as possible before attending the US later in the year.

“In some way the pressure is not on me, as the others need to catch up. I will not be complacent by any means, but I will certainly be playing ‘smart’ golf.”

Both Wilkin and Holman are the calibre of players who can mount a Sunday charge.

Holman has played well in Australasian Tour events with a runner-up finish at the Victorian Open and a top-5 finish at the Heritage Classic.

The 2012 Mandurah Open was Holman’s last victory yet an opening 75 on Thursday certainly dinted his run here in Adelaide but subsequent rounds of 69-70 has the world number 59 back in the mix.

Wilkin is off a top-15 at last month’s Riversdale Cup having made the top-16 at the Australian Amateur. Wilkin’s best finish to date is a tied 6th at the 2012 Keperra Bowl, although he secured a tied runner-up finish in a main amateur event in China.

At present this tournament is for Hoeve’s taking and following an impressive display of precision driving and hitting greens in regulation, you have to favour his chances for collecting his maiden amateur title victory come tomorrow afternoon.