Dann holds on to win Master of the Amateurs playoff

Charlie Dann has withstood a late charge by Zach Murray to win the Australian Master of the Amateurs on the first sudden death playoff hole at The Royal Melbourne Golf Club.

Dann started the final round at 10-under and five strokes ahead of Cameron John and Shae Wools-Cobb and managed to stretched his lead to get to 11-under before a double bogey on the 5th opened the door for John to make his charge. 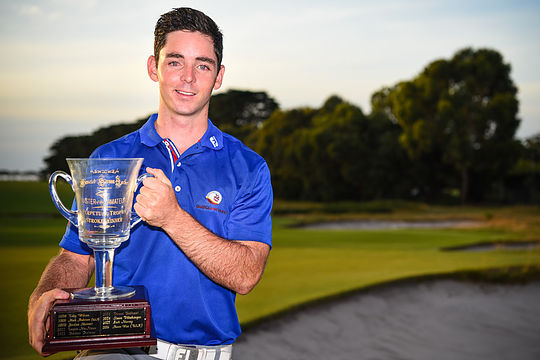 At the sixth John was just two behind after a brilliant up-and down on the 5th and looked to press Dann for the lead. Dann responded brilliantly with a birdie on the short par 3, 7th on the West Course to open a three stroke lead.

Birdies at the 7th and 8th holes had Dann’s lead move to four and after John bogeyed the 9th, Dann would take a five stroke lead into the back nine.

By the 12th Dann had moved to 12-under yet the title was not easily going to fall into his hands.

Trouble struck on the short par 3, 13th after Dann’s tee shot found the left side pot before his bunker shot skidded across the green. A double bogey would result and the bogey train started to roll with Dann dropping shots at the 14th and 15th to fall back to 8-under.

Meanwhile the 2015 champion, Zach Murray, in two groups ahead had been going quietly about his business and would card a 5-under-67 to reach 8-under. Murray had a chance on the 18th to get to 9-under after a sensational 20 foot putt kissed the edge of the lip, but never the less he would post a score to challenge for the title.

Dann meanwhile was able to steady the ship, no more so than a clutch par at the 208 metre par 3 16th, a brut of a hole on the West Course which had played havoc all day with the field. When Dann’s par sunk on the 16th a sigh of relief was clearly evident on his face.

Two tradesmen like pars over the final two had Dann into a playoff for the title and the second in eight years after Rickie Fowler and Mark Anderson went hammer and tong back in 2009 over four extra holes.

This time there was to be just one extra hole needed after Dann’s 5 iron approach found the centre of the green after Murray’s approach landed in the green side back bunker.

“It was a real grind,” said Dann who also has the Keperra Bowl and Mandurah Open titles to his credit.

“I was able to keep my composure and stay cool when I needed. But it certainly was a battle and full credit for Zach for posting such a great final round and the way we battled it out.”

It was a fitting ending to the 20th anniversary of this tournament.

Royal Melbourne was presented nothing short of specular and the field was the strongest that we will see in Australia this season by a long shot.

15-year-old Karl Vilips blasted out of the blocks with a 68 on the first day, followed by James Grierson firing a 67 to take the second round lead before Dann made his run across the two final days.

It was amateur golf at its best and was played on one of the world’s best layouts – you could not ask for more.