Charlie Dann will take a five stroke lead into the final round of the Australian Master of the Amateurs being played at The Royal Melbourne Golf Club.

Dann, a winner most recently at the Keperra Bowl and Mandurah Open, fired a third round 3-under 69 to add to his opening rounds of 69-68 and is currently at 10 under-par.

It was a tradesman like performance by Dann who so far has carded 20 birdies to his credit which see the Queenslander a round away from claiming Australia’s highest ranked amateur championship.

“I hate to say it, but I’ve been playing boring golf really,” said Dann.

“I have no idea that twenty birdies are on my card. I’ve just managed to keep the ball in play and hit greens. It’s tough out there and your putting has to be precise to get a score. I’ve managed to control my game so far and we will see what happens tomorrow. But yes, obviously I’m happy to be where I am.” 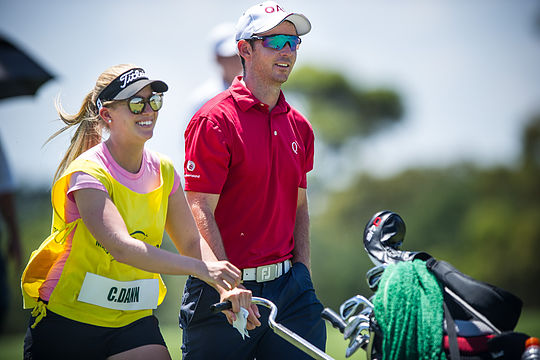 The West Course at The Royal Melbourne Golf Club has been presented nothing short of spectacular. Greens are firming and with the sun baking the surfaces, tomorrow’s final round is shaping up to be another fantastic encounter between the world’s best amateur golfers.

Despite the challenging conditions, three players had the West course record of 63 in their sights.

Victorian star Cameron John was nothing short of spectacular going five under through the opening five holes, a reflection of his prodigious talent. John encountered some trouble in the closing stretches, which are some of the world’s best closing holes, yet carded a 7-under 65 to be five strokes behind Dann to have outright second position.

American Corey Pereira also had his game going and at one stage was 8-under through 12, but errors over the closing stretch saw Pereira card a 67.

Austin Bautista was another on fire getting to 7-under before a double at the challenging 16th and a bogey at the 17th had him sign for a 4-under 68.

Last year, Dann secured a top-3 finish and with the display of golf he exhibited today and the manner he was able to control the flight of his ball, the 24-year-old has moved himself into poll position to take out this championship.

But take nothing away from Cameron John. The Victorian will certainly go out tomorrow looking to claw back the five stroke deficit but maybe the gap is just too wide given the way Dann is currently playing.