Darren Clarke vowed there would be no repeat of his week-long 2011 Open Championship victory celebrations after capturing the TimberTech Championship in Florida.

Clarke, 52, ended a more than nine-year winless drought comfortably two-putting the final green for birdie last Sunday to capture the Champion Tour event in Boca Raton, Florida and close to where his eldest son, Tyrone, is in college. 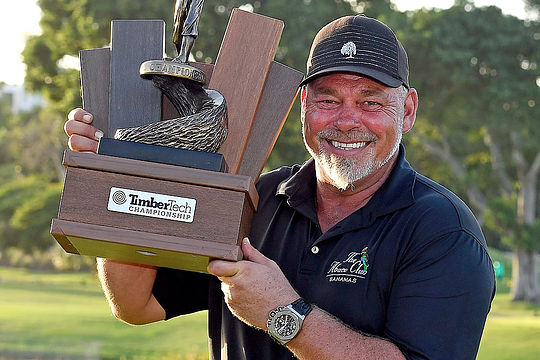 Clarke won a maiden Tour title by denying defending champ Bernhard Langer a 42nd Tour victory and also American Jim Furyk his third in three months in the over-50s brigade with the pair sharing second place behind the Northern Irishman.

It had been a second round 62 on Saturday that propelled Clarke into a share of the lead with Swede Robert Karlsson heading into the last day but it turned into a nerve-wracking final round for Clarke who found himself tied with Langer coming down the last.

“As much as I was looking to win, I am delighted for Darren as he is a good friend,” said Langer.

“People have no idea what it’s like to have not won for that long and then win another professional event, because in our job you never know if you’re going to win another one and the longer it goes, the more you doubt.

Following the win, Clarke was met by his wife Allison before they jumped into a motorised buggy and headed back to the clubhouse, with a delighted Clarke looking into a TV camera declaring: “Beer time. Beer-o’clock”.

The last occasion Clarke won the celebrations went on all night at Royal St. George’s and into the rest of the week. Clarke had partied so much on the Sunday night and into the early hours that when he attended a mid-Monday morning post-Open victory press conference he admitted he had not been to bed and was clearly very hungover.

Clarke has assured his fans it would not be the same nine-years on.

“The last time I won and I had a very sore head for a week. So, I don’t think my headache is going to last a full week this time like it did the last time.”

“I think it will be a pretty bad headache tomorrow morning I would imagine but just for a little bit.”

The only downside of Clarke’s win is that he has been forced out of this week’s season-ending Charles Schwab Championship in Phoenix due to an expired US visa and is heading home.

“Unfortunately, with my P-1 visa situation, Boca Raton is my last tournament, so I can’t play Phoenix,” he said.

A U.S. P-1 visa is issued to ‘internationally-recognised’ athletes or entertainers’ and can only be renewed outside of the U.S.

Stephen Leaney finished the best of the Australians in a tie for 10th with David McKenzie and Rod Pampling sharing 26th place on 8-under.