The LPGA Tour rookie put away a final hole birdie, her third on the back nine, to claim a 7-under, two-shot victory over Breanna Gill. 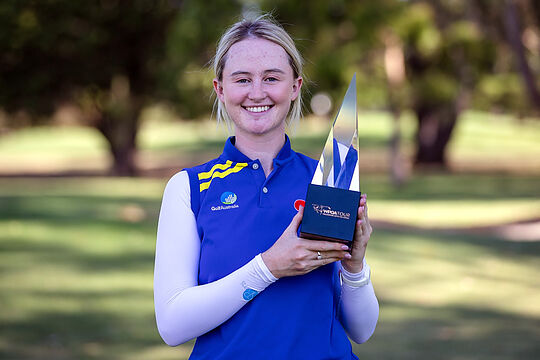 Both players carded opening rounds of 68 to take the early lead but it was Davidson who was able to double-down on day two with a 69 up against Gill’s 71, the only difference in a tightly-fought contest.

“This is a great boost to me so early in the year, I had a solid week last week at the WPGA Championship and to get a win under my belt here at Latrobe is amazing,” said Davidson, who finished 4th at Royal Queensland.

“I have been working really hard with my team and I just wanted to thank them for all the work they have put in. This win is for them as much as me and I am so grateful to have such a great group of people supporting me.”

Davidson takes home a first prize cheque of $7,500 for her debut win with second-placed Gill earning $4,500. Davidson’s previous best result came at the 2018 Vic Open where she finished runner-up behind Minjee Lee.

The 23-year-old Davidson, who has spent the last few years on the Japan Ladies Tour, earned her 2022 LPGA Tour card via Q-School late last year and will join fellow Q-School graduate Steph Kyriacou in heading to the US for their rookie seasons.

Next up on the local calendar is the mixed-gender The Players Series Victoria hosted by Geoff Ogilvy at Rosebud Country Club on Victoria’s Mornington Peninsula. Davison finished in a share of third place at last year’s inaugural staging of the event.