Davies wins second major of the year at Senior LPGA

It’s difficult to beat anyone who is toughened by weekly tournament play…and if her name happens to be Dame Laura Davies, well, that just makes the task even harder.

So it was hardly surprising that the battle-hardened Davies, who can still match it with the best players in the world on her day, was able to string together three consecutive sub-par rounds to win the Senior LPGA Championship at French Lick, Indiana. 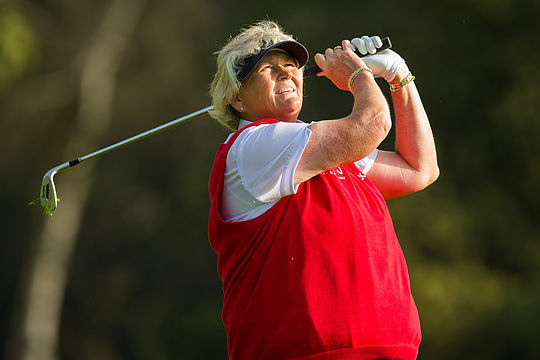 And it was a course that Davies later admitted she didn’t think she could master.

Only four players finished at even or better and only the champion, Davies, was able to post three rounds under-par.

“This is fantastic,” Davies said. “Winning the US [Senior] Women’s Open was a real thrill, and this is a golf course that I didn’t think I could win on. So for me, this is a real victory.”

“I’ve always played okay around here, but I’ve never strung three rounds together…I’ve always had one big number, so this is nice.”

Equal runner-up Alfredsson made a brief final-round charge but couldn’t maintain her momentum – and was ever-gracious in defeat: “She’s always been an amazing golfer,” Alfredsson said of Davies.

“I think it’s a bit different for us who only play about twice a year. [But] she is an amazing player.”

Davies admitted that winning the title on a Pete Dye course made it even more special.

This was the 86th professional win, worldwide, for the Hall of Famer.