Two of Australia’s brightest young stars, Cam Davis and Stephanie Kyriacou, are heading back to our shores to play the Australian summer.

Davis, who has recently been named as part of the International Team for the Presidents Cup, will bring his PGA Tour-winning game Down Under beginning with the Australian PGA Championship at Royal Queensland in November followed by the Australian Open at Victoria Golf Club and Kingston Heath Golf Club in Melbourne a week later. 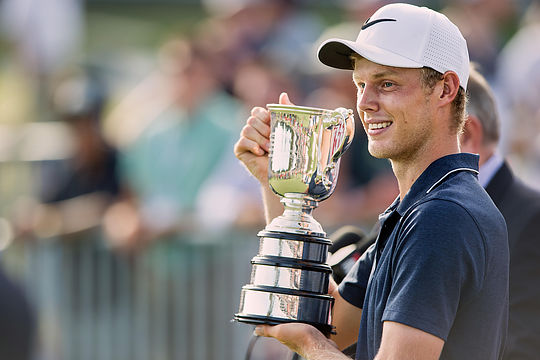 The 27-year-old joins PGA Tour stars Cameron Smith, Marc Leishman and Lucas Herbert along with European stars Min Woo Lee and Kiwi Ryan Fox for what is shaping up as one of the biggest summers in many years.

“It’s just so good to be coming home to play again,” said Davis, who won the 2017 Australian Open (pictured) ahead of a stellar field including Jordan Spieth, Jason Day and Cameron Smith.

“Everyone knows it’s been tough through the pandemic not being able to move around, and now that it’s possible again I can’t wait to play these events in Brisbane and Melbourne.”

Steph Kyriacou, a fellow Sydneysider, made her debut on the LPGA Tour this year following a breakthrough season on the Ladies European Tour in 2021 and has impressed at the highest level with two top-10 finishes.

The 21-year-old St Michael’s member will be playing in her first Australian Open following last year’s cancellation due to the pandemic.

“Any time you get to tee it up on the Melbourne sandbelt, you’ve got to love it…I’ve always enjoyed that style of golf since my days as an amateur coming to play in Melbourne, and we’re all really pumped up about the new format of the Australian Open as well.”

“I just can’t wait to get home and have a crack at it and it would be a dream come true to win my national Open.”

The ISPS HANDA Australian Opens will tee off from 1-4 December.