As a superstar amateur Cameron Davis was touted as one of the great bright hopes for the next generation of Australian golf.

He turned Professional at the 2016 Isuzu Queensland Open and since then has been plying his trade on the Mackenzie Tour – PGA TOUR Canada before coming home for the Aussie summer of golf.

Today at The Australian, Davis showed his prodigious talent firing an 8-under 63 to lead the Emirates Australian Open after day one.

The secret to his round was course knowledge; Davis won the Australian Amateur on this layout in 2015.

“I knew the golf course well, I didn’t have to think too hard around my practice round, so I felt like I had a good chance this week,” said Davis.

“I played here like eight times in five days, so I got to know it pretty well. I saw some places I probably shouldn’t have, but yeah, it’s nice to play it that many times and be able to come back and see not too much has changed. It’s very familiar out here.”

His round was highlighted by four consecutive birdies starting at the 5th hole and topped off by a chip in on the 7th followed by a chance to hole out again on the 8th.

“I had a good run there. Probably that one on 8 shouldn’t have gone in because it was too far away. A back-to-back chip in would have been a bit rude,” added Davis. 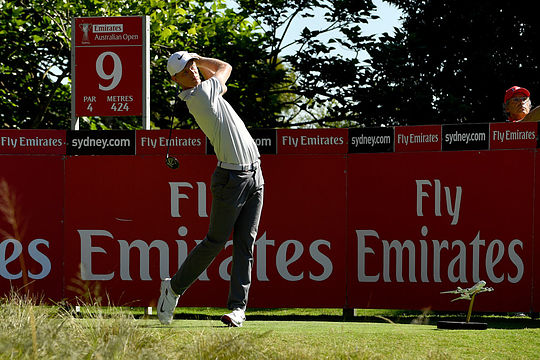 “The first eight holes everything was looking like it was going in, even from off the green, which was nice.”

Another young Aussie, Taylor Macdonald (25) also enjoyed his opening round at The Australian firing 6-under 65.

“It was great. I felt really comfy after playing a couple (Australian Open tournaments) in my life. The nerves weren’t there this morning and I was striking it well, I’m pumped,” said Macdonald.

Meanwhile tournament drawcard and World Number 12 Jason Day thrilled the crowds producing eight birdies on his way to shooting 5-under 66.

“It was exciting to play. The crowds were terrific out there. Our whole group played well and it’s really nice to be able to kind of feed off each other,” said Day, who played with Geoff Ogilvy (2-under 69) and Rod Pampling (3-under 68).

“That’s the hardest thing that I’ve been trying to get across the line is really capitalising on the opportunities that I’ve had.

“I just need to somehow turn those good solid par holes into a great birdie hole.”

Playing on the ISPS HANDA PGA Tour of Australasia for the first time since 2013, Day loved having the support of a home crowd.

“It’s been four years since I’ve been here, so I think I owe it to everyone that wants an autograph or wants a picture, to be able to stop and give it to them,” added Day.

“They were very supportive of not only me, but the whole group, they’re great fans and to be able to hopefully make someone’s day is nice.”

After the first round Day is tied third alongside South Australian Nick Cullen who has spent the year playing on the European Challenge Tour and New South Welshman Alex Edge who birdied the last to see his name on the leaderboard alongside Australia’s highest ranked golfer in the world.

It was a mixed day on course for defending champion Jordan Spieth but he was happy to end the day with a birdie on the 18th to shoot 1-under the card.

“I made, I think five bogeys today, which to shoot under par with that, that’s really good,” said Spieth, who proved that even the World Number 2 can get nervous on the first tee.

“This was actually the longest I’ve had in between tournaments since maybe college; even last year was a week less, so I was a little anxious to get started.

“I kind of had the nerves to begin and my short game was a bit rusty and then started to pick it up and played pretty well from there.

While he sits seven shots off the leading pace, Spieth is unperturbed as he looks for a low round in the morning conditions tomorrow.

“My goal is to shoot three or four (under par) per round, so I’ve got to make up a couple,” added Spieth.

“It’s going to play pretty similar tomorrow as to today, this golf course is going to bake out on the weekend, you’ll see scores back up on this course because the wind always blows and the greens firm up.

“I’m not anxious about the finish of this tournament yet, I’ll just have to kind of stay focused on the goals that I’ve set.”

The highlight of the day belongs to New Zealander Brad Shilton who had a hole-in-one on the 172m par-3 11th hole, his second hole of the day.

Using his 5 iron, Shilton scored the ace and a Rose Gold, TAG Heuer, Carrera Calibre Heuer 01, timepiece valued at $16,300 for his efforts.

The second round of the Emirates Australian Open will tee off at 6.50am with Cameron Davis on course at 12.05pm, Jason Day at 12.10pm and Jordan Spieth at 7.05am.