Presidents Cup and PGA TOUR officials today announced 21-time PGA TOUR winner and World Golf Hall of Fame member Davis Love III has been named captain of the U.S. Team for the 2022 Presidents Cup, which will be staged at Quail Hollow Club in Charlotte, North Carolina, the week of September 19-25.

Love joins South African Trevor Immelman, who was named captain of the International Team in April 2020. 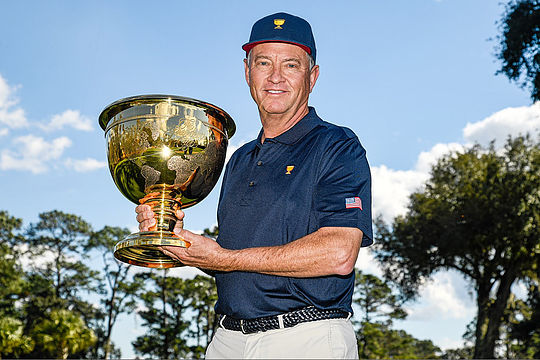 Davis Love III takes over from Tiger Woods as the US Team captain for 2022 (Credit: PGA Tour)

Love represented the United States in the Presidents Cup six times in his career, including the inaugural event in 1994, where he compiled a 4-0-1 record while leading the U.S. Team to a 20-12 victory over the International Team.

“It’s a tremendous honour to be named captain of the U.S. Team for the 2022 Presidents Cup. My history with this event dating back to 1994 conjures up indelible memories of competition, camaraderie and sportsmanship, and I’m thrilled to be leading the top American players into Quail Hollow Club next September,” said Love.

“The U.S. Team has been guided by some of the game’s all-time greats since 1994, and I will do my best to carry on that legacy as we look to retain the Cup.”