Davis, Luck on their way to the big stage

Cameron Davis fired a final round 5-under-par on Sunday to storm up the leaderboard for a 3rd place finish at the Web.Com Tour Championship at Atlantic Beach Country Club.

Davis fired rounds of 66-67-67-66 to finish at 18-under five behind eventual winner, American Denny McCarthy at 23-under-par, with Lucas Glover in second place at 19-under-par. 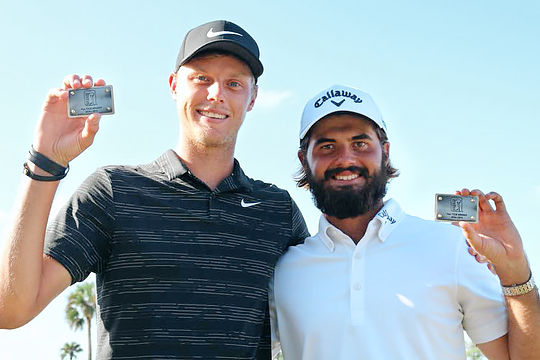 Those 25 card earners from the Web.com Tour regular season could still play in the four-event series for better PGA Tour priority, but the top-25 finishers outside that group in money earned at the Web.com Tour Finals also earned 2018-19 PGA Tour cards.

Davis moved from seventh to fifth on the Finals money list minus the regular-season card earners having set up his series with a win at the Nashville Open in May and solid season ending performances during the Finals series.

Curtis Luck also played his way onto the main tour with solid play during the Finals, at one stage sitting in second position following 54 holes at the Tour Championship, but signed an even par final round and a tie for eighth which was enough to hold his position at 16th in the standings and to be promoted to the PGA Tour.

Aaron Baddeley, John Senden and Cameron Percy, meanwhile, all missed the cut by one shot at four-under-par. For Baddeley, that meant falling from 20th to 30th in the standings.

After 16 seasons on the PGA Tour Baddeley will now rely on invitations to stay on the main tour next year, his 70th position in career earnings not enough to qualify for a special one-off exemption.