Aussie Cameron Davis nailed an eagle-birdie finish and then a five hole playoff to capture his first PGA Tour victory at the Rocket Mortgage Classic in Detroit.

The 26-year-old’s tournament was looking to be over after a bogey on the 16th hole had the former Australian Amateur and Open winner two shots adrift of clubhouse leader Alex Noren, but an excellent hole out on the 17th bunker for an eagle and then clutch birdie on the last to card a back nine in 5-under-par got Davis into a playoff with Troy Merritt and Joaquin Niemann.

The first playoff hole had Neimann eliminated with his second shot flying the green and resulting in a bogey. Davis and Merritt continued to trade putts for a win, with Merrit saving par on the third playoff hole after Davis narrowly missed a birdie attempt.

The two could not be separated on the par 5, 17th, forcing them back to the par 3 15th where Davis found the green and Merritt missed and was not able to get up and down.

“I tried to put everything out of my mind and hit every short for what it was worth,” said Davis.

“As simple as that is said, it is just so hard to do when the pressure is on like that. I kept putting pretty good swings on it. I did not make any good putts but kept it in play so it worked out alright. I’ve been in some good positions before, but to play the golf that I played coming down the stretch was just awesome.”

What’s In The Bag: Cam Davis

Davis’ biggest win prior to Sunday was the 2017 Australian Open, where he shot a final-round 64 to finish ahead of Jason Day and Jordan Spieth. Davis has also won on the Web.com Tour back in 2018 when he nailed a one stroke victory over three other players to win the Nashville Open.

The Sydney-sider becomes the third Australian win this season on the PGA Tour following victories by Cameron Smith and Marc Leishman at the Zurich Classic of New Orleans and Matt Jones at the Honda Classic. 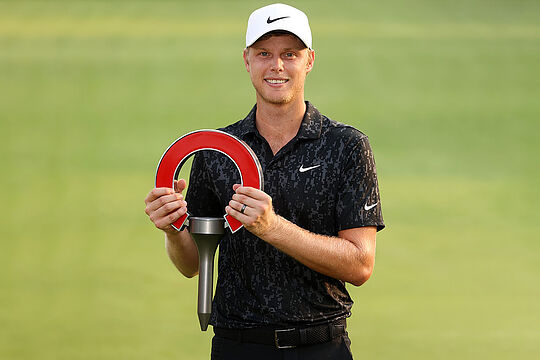 Jason Day was the next best Australian finishing in a share of 14th position, a final round 66 moving the former world number 1 twenty-one places up the leaderboard. Cameron Percy fired a closing round 68 to share 41st position with Aaron Baddeley.

Matt Jones finished in a tie for 52nd position to be the last of the Aussies making the weekend.

After an 8-hole playoff last week at the Travelers and Sunday’s five-hole effort, the 13-hole total is the most in any 2-week span in PGA Tour history.

The Tour now heads to Illinois for the $6.2 million John Deere Classic although many of the Tour’s top players are already busy prepping for the Open Championship on July 15.