16-year-old Californian Anna Davis has won the Augusta National Women’s Amateur by a shot over Ingrid Lindblad and Latanna Stone in Georgia.

The high-schooler fired a 3-under 69 in the final round of the 54-hole tournament to join previous winners, Japan’s Tsubase Kajitani and ironically Sunday’s LPGA major champion, Jennifer Kupcho, on the trophy. 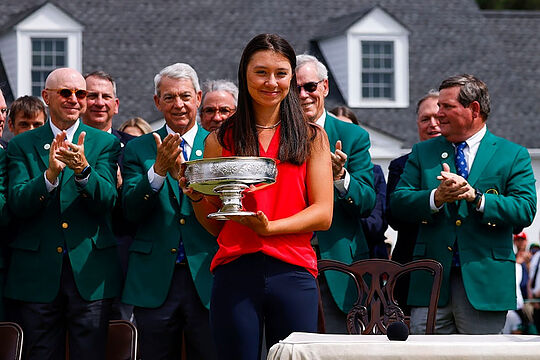 “I’m still a little shocked,” said Davis of her win. “I don’t think it’s processed yet that I’ve won here, but it’s pretty surreal, to be honest. I’m speechless. I can’t even fathom what just happened. It all happened very quickly.”

While Davis missed a birdie putt at the 18th hole to finish on 1-under, two holes behind her Latanna Stone looked set to claim victory after birdieing the 16th to move to 3-under with two holes to play.

However, Stone’s charge at the title inexplicably came to an end at the very next hole where she came up short of the green and ended up walking away with a double bogey to sit back alongside Davis coming to the 18th tee.

Needing a par, Stone drove her ball right and into the trees and then finished short of the green with her second shot. She then missed a five-metre return putt for par to hand the title to Davis.

“It’s just heartbreaking. I kind of knew where I stood on 17, and I was just thinking par out. I just didn’t have the right club and kind of left myself with a difficult up-and-down. I was trying to be aggressive and just kind of lost it, but I thought I could get it back on 18, but I had a lot going on in my head with where I was at,” said Stone.

Despite being ranked 100th in the world coming into the week, Davis wasn’t exactly an unknown. She earned her place in the event thanks to a seven-shot win as a 15-year-old at the 2021 Girls Junior PGA Championship and was also a member of the US Junior Solheim Cup last year and the US Junior Ryder Cup team in 2020 before it was cancelled due to the pandemic.

Kirsten Rudgeley lead the way for the Australians and continued a rich vein of form over the past 18 months for the Perth native. Rudgeley finished in a three-way tie for 8th place and just four shots off the pace.

Emily Mahar, the only other Aussie in the field, missed the cut following back to back rounds of 76. The Queenslander has been studying at Virginia Tech in the US since 2017 and became the first ‘Hokie’ to compete in the women’s event.