World No. 1 Jason Day sought to diffuse criticism for slow play insisting if you were playing for a $US 1m first prize cheque of course you are going to take longer playing your shots.

Day had addressed the issue of his tortoise-like ways in the opening event of 2017 in Hawaii when he boldly stated: “I don’t care about speeding up my game.” 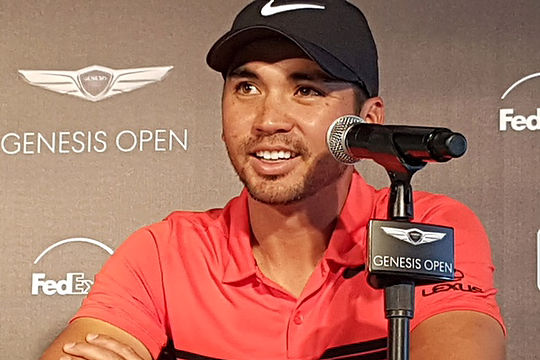 Day’s agonising pace-of-play has come under increasing scrutiny with Day being likened to former PGA Tour competitor, Glen Day who was nick-named ‘All Day’ for obvious reasons.

Of course, the Ohio-based Day is not the only one guilty of slow play but as the game’s current top-ranked golfer you would think Day would be the one to set an example.

Also it is not only officials and observers commenting on his ‘slowness’ with Day revealing he can’t go to the restroom without someone, in this case Bubba Watson, taking the proverbial ‘piss’ out of him.

But despite ribbing from Bubba and discussions with officials from the PGA Tour, Day reckons he’s well within the rules regarding slow play as he reiterated ahead of this week’s Genesis Open at the Riviera Club just outside Santa Monica and to the north of Los Angeles.

“I think Bubba got me in the restroom one time, he said he’s going to report me,” said Day smiling.

“He said you may as well fine him. I said okay, it’s fine, you can fine me as long as I keep beating you. I was okay with it.”

“That’s the biggest thing for me is like I wanted to be a lot more deliberate. Now, saying deliberate is not being slow.”

“Deliberate is being a lot more ‑‑ I’ve been 100 percent in my process of actually hitting the shot. That’s not slowing everything down. I still walk just as fast as I have before.”

Day then looked at the assembled media in the Genesis press centre interview room and commented: “You know, I would like to think that everyone in this room would take just a little bit longer if they had a million dollars on their mind.”

“You just can’t get out there and just hit it just because that’s what everyone thinks. Once again, tournament golf to amateur golf is different, but you still have to abide by the rules and obviously I respect the other players that are playing.”

“But last year I felt that I kind of, you know, I think I had a lot more peer pressure and I’m like I’ve got to speed up play, but why would I need to do that when I played such great golf.”

“I only had one time last year and, you know, why would I need to speed up when I know that if I keep playing the way I’m doing, I’ll still stay in pace but I’ll play some good golf.”

“I’m still trying to work on things, being a lot more deliberate, making sure that everything’s 100 percent. But I once again respect the players, respect the rules and go from there”.

However Day is under threat from a different quarter in this week’s US$7.2m tournament hosted by the Tiger Woods Foundation and that will come from World No. 3 Dustin Johnson and red-hot World No. 5 Hideki Matsyuama, with each able to go to World No. 1 with victory at Riviera.

It led to the 29-year old being asked if he felt any pressure as the World No. 1 – a position Day has enjoyed for a total of 51 weeks thus making him the seventh longest-running top-ranked player in the game since the World Rankings were initiated since Masters week of 1986.

On Monday, Day went ahead of Ian Woosnam and is now just 10 weeks shy of matching the World No. 1 ranked period of the late, great Seve Ballesteros.

“It’s a good place to be, it really is a good place to be. I wouldn’t trade it for the world even though it’s mentally and sometimes physically demanding because once again, you’re out doing everything, you’re seeing the fans, seeing the media, trying to play competitive golf and then you go back home and you’re trying to be the No. 1 dad as well. Unfortunately, sometimes it’s really, really difficult not to bring it home.”

And Day will get a taste of that pressure over the opening two days of the Genesis Open competing in the company of Matsuyama and World No. 8 Justin Thomas.