Crooked Stick, IN: World No.1 and defending BMW Championship winner Jason Day has been given the all-clear to contest the season-ending Tour Championship after the scare of having to withdraw with a back injury after eight holes in the final round of the BMW Championship.

Day tweaked his lower back when he bent down to put a tee in the ground on the ninth tee box and decided to pull out of the event rather than risk further damage. 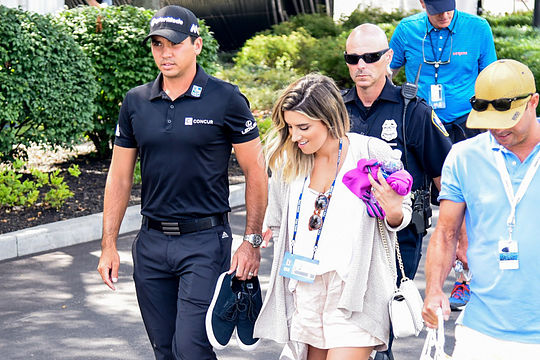 The concern highlighted a history of back issues for Day, who withdrew from the 2014 BMW Championship with a similar complaint.

Day almost withdrew from both The Barclays in 2015 and the World Golf Championships Dell Match Play in 2016 with the same issue before fighting through the pain and actually winning.

“He’s all right, he’s just got some back issues and is in a little bit of pain. He’s getting treatment right now. I don’t think it’s anything that he hasn’t dealt with before,” Day’s manager Bud Martin said.

“The trainer is maybe thinking it’s the same type of thing that he dealt with I think at the Barclays and last year where he picked something up in his bus and it kind of got out of line.

“But just better safe than sorry. Instead of forcing it, we just decided that it was more prudent to kind of come in, get it worked on, and deal with it.”

Martin would not speculate whether Day would be at full strength for the finale of the FedExCup Playoffs.

Fortunately for Day, who began the week at No. 2 on the FedExCup points list, he has dropped just two spot to No. 4 on the points list and still sits inside the all-important top 5 headed to East Lake.

Those in the top 5 can guarantee the FedExCup with a win in the TOUR Championship.

“We’ll probably get a MRI just to double check. My gut is that he’ll be fine,” Martin said.

“Hopefully, he’ll be ready for Atlanta, but the most important thing is the next 15 years, not the next 15 days.”