Australia’s Jason Day has succumbed to what is believed to be a recurrence of dizzy spills during his final holes of round two at the U.S. Open at Chambers Bay.

Day fainted and collapsed halfway down the fairway on the 9th hole (his 18th) after hitting his tee shot into a green side bunker, It was some minutes before Day was able to recover sufficiently to get to his feet, let alone attempt to finish the hole. 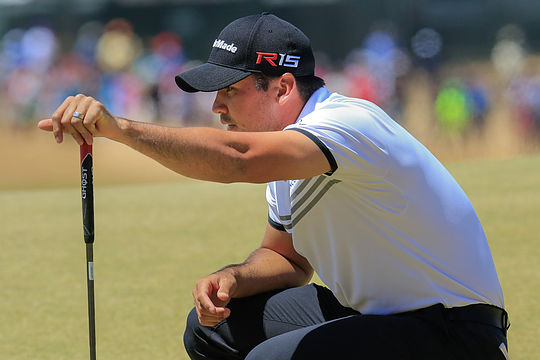 Jason Day lining up his putt at the 7th green on day two of the 2015 US Open (Credit: www.golffile.ie)

Day showed great courage despite falling to one knee again, splashing out of the trap and two-putting for bogey.

Under medical supervision, he was assisted to the scoring area to sign for a final round even-par 70 to sit at two-under at the halfway mark of the championship. He was then ushered into a vehicle to be taken to a nearby medical facility.

The Queenslander has recently undergone a series of tests after suffering loss of energy and dizzy spells, which forced his withdrawal from the Byron Nelson event three weeks ago.

All tests have come back negative and Day had commented at the start of this week that this was the best he had felt in a long time.

Day’s plight shook everyone at the Chambers Bay layout with the vision beamed live on the huge screens located throughout the course.

Playing partners Justin Rose and Jordan Spieth were clearly concerned for the Australian’s welfare as were the group of Tiger Woods, Rickie Fowler and Louis Oosthuizen waiting on the tee in the following group.

I was positioned behind Dustin Johnson, Adam Scott and Rory McIlroy on the practice range before their afternoon tee times when the scene was displayed on the big screen at the range.

It was some time before the player’s identity became known but the concern of the players was clearly apparently as the news began to filter out.

Following the completion of his first round, ironically on the same 9th hole, Gary Woodland was also taken to hospital suffering dehydration following a diagnosis of a virus.

His health had recovered in time for him to take his place in today’s second round,