Australia’s Jason Day and his American team-mate Cameron Tringale combined to shoot a remarkable 17-under par 55 on the opening day of the Franklin Templeton Shootout at the Triburon Club in Naples, Florida.

The Day and Tringale pairing stormed to a two shot lead when they played their last 10 holes in a remarkable 13-under par that included back-to-back eagles at 12 and 13. 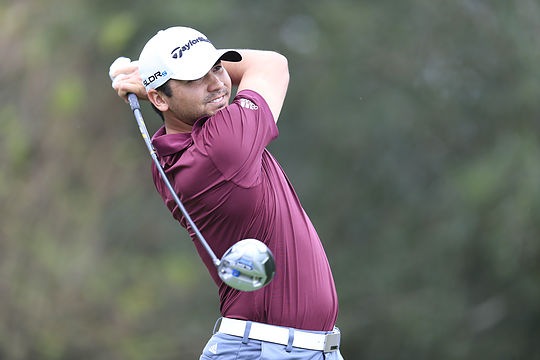 In fact, the duo had just three pars in their round at the second, fourth and eighth holes.

Day had teamed a year ago with then Masters champion Adam Scott to secure victory in the 2013 World Cup of Golf at Royal Melbourne, and again today the US-based Aussie displayed his fondness for team format.

“I just enjoy playing these team events and Cameron eluded to it earlier but just the way both of us putt is very similar to the way we both read the greens, so to be able to fall in line with a great putter like Cam’ helped a lot and especially today in the Sramble format,” said Day.

“It was just get out and have Cam hit the fairway first and from there we just opened up a lot of scoring opportunities.

“But then Cam’s a great partner. He’s a very accomplished player, finished inside the Top-30 on the FedEx Cup this year, so to have him as a partner was great as he’s very easy to please as he’s an easy going guy.

“We kind of pushed our round to where it finished with those two eagles back-to-back, so that definitely helped.”

Defending champions Matt Kuchar and Harris English are in second place at 15-under par and with English birding the last.

Second Round, Modified Alternate Shot: Each player hits a drive on every hole and one drive is selected. The player whose drive is NOT selected hits the second shot, and they alternate shots until the ball is holed.

Final Round, Better Ball: Each player plays through every hole using his own ball. The player whose score is the lowest on each hole will be the team score for that hole.