Newly-crowned PGA Champion Jason Day insists it would the ‘icing on the cake’ should he capture the FedExCup and then unseat World No. 1 Jordan Spieth in the voting as PGA Tour ‘Player of the Year’.

Day is returning to competition at this week’s Barclays Championship in Edison, New Jersey after his historic three stroke success over Spieth at Whistling Straits in Wisconsin. 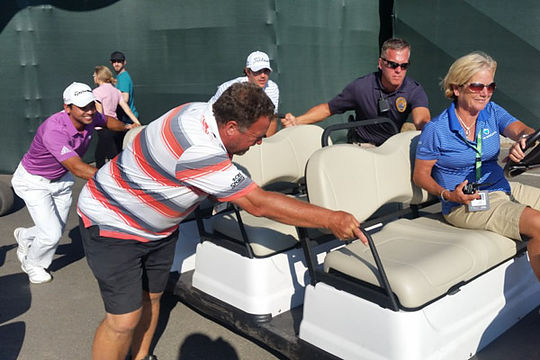 Jason Day and Brooks Koepka helping to push a broken down cart out of the way (Credit: www.golfbytourmiss.com)

The 27-year old Australian intends contesting all four FedExCup Play-Off Series events and is hopeful, despite Spieth having captured two Majors and two other PGA Tour titles this season, that winning the FedExCup will deny Spieth ‘Player of the Year’ honours.

“The next four weeks starting this week here in New Jersey are very important and to be able to win the FedExCup would be the icing on my season,” said Day exclusively to Reuters.

“If I could snag the FedExCup trophy to go with my PGA Championship victory I could go very close to being named ‘Player of the Year’.

“I know it’s going to be tough to unseat Jordan because he’s played such amazing golf this year but then if I were to capture the FedExCup then it puts my name in the mix for that award, and gives our peers voting on the award someone else’s name to think about.

“And if there is any extra inspiration I need to win the FedExCup then it’s been looking each day at the Rodman Wanamaker Trophy that’s sitting proudly upstairs back home in my office.”

“I sat there one time last week just looking at it for I don’t know how long, and just reading all the names on the trophy.”

“And now having won one Major, it would be nice to go on and win all four.”

Apart from hosting two corporate outings in his U.S. hometown of Columbus, Ohio Day has spent much of last week relaxing with his wife and young son.

However Day had hardly any time to himself upon arrival earlier this week at the Plainfield course as he found himself being congratulated at every turn by his fellow competitors, officials, caddies and spectators.

“The reception since I arrived here at Plainfield has been simply amazing and also after all the media engagements and hosting a couple of corporate days, I am really pleased to be getting back to work this week,” he said.

“What I really want to do is regain that momentum I had in winning the PGA Championship, so I want to keep that going all through all four FedExCup events.

“I am No. 2 on the points standing and I feel as though I have a good chance to end the year as No. 1 as long as I keep that good form going.

“I’ve clearly come back to the Tour with a real spring in my step and I guess that’s what being a Major Champion is all about, and I would like to have a week like not just one a year but four times a year, and if not more.

“So it’s also about managing your recovery so that you can properly prepare for an important week like the Barclays, as I dealt with so many media commitments last week but then in saying that, I am fine with that aspect.”

“I had to make sure I still practiced on my game and found time to go into the gym but also hung out with the family.”

“Of course, winning a first Major was a new experience for me and I feel as though I dealt with the first week and a bit okay.”

“So hopefully, I will be a little bit more better prepared when hopefully the next one comes around.”

However, Day certainly was not prepared when the eight-seater motorised golf cart carrying him and a few others from the Plainfield Country Club practice range to the clubhouse broke down.

Day happily jumped out to push the cart away from the main path ferrying players and caddies.

“A PGA champion is not supposed to do this, is he?” said Day smiling.