Australia’s Jason Day has ended Graeme McDowell’s run to muscle his way into the final four of the WGC – Accenture Match-Play Championship.

Day, 25 won a see-saw struggle against the European Ryder Cup star 1up on the final green. 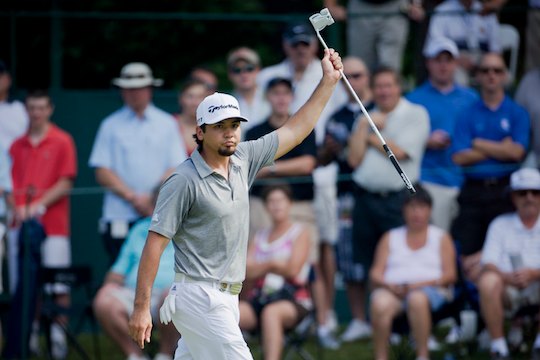 The Australian is competing in the event for a third straight year but it’s the first time Day has made the final four.

McDowell had won the first hole and went 2up at the third but Day bounced back winning the 4th, 7th and 11th holes to go 1up.

The two then traded blows, with McDowell winning at the 14th, Day the 15th, McDowell the 16th and then Day, who had been runner-up in the 2011 Masters, getting back to 1up at the 17th.

Both players then parred the last that sealed McDowell’s fate and also Day’s superb success.

“It’s going to be very exciting but I have to get some good rest tonight and my head is not right with it at the moment as it is so mentally grinding,” said Day.

“I kept on giving Graeme small, cheap bogeys and I just can’t do that as if I do that my opponent is going to fully capitalise.”

“But every round feels like a Sunday afternoon like at any other tournament, but I have to grind it out again in the morning and try and cut out the mistakes and that should get me into the final”

And Day will be looking to join Geoff Ogilvy as only second Australian to capture the WGC – Accenture Match-Play championship.

In other matches England’s Ian Poulter, and winner of the event in 2011, fought back from losing the first hole to defeat last year’s USA Ryder Cup rival, Steve Stricker 3up and after being 4up over the American through 12 holes.