In a wonderful outpouring of generosity Australia’s Jason Day not only earned the prize of a $100,000 scholarship donation but he presented the Evans Scholarship Foundation with the gleaming new BMW sedan he won on day two of the BMW Championship at Conway Farms.

Day’s ace at the par three, 17th also earned the BMW Hole-in-One Scholarship, a full, four-year scholarship worth $100,000 to the Evans Scholars Foundation. 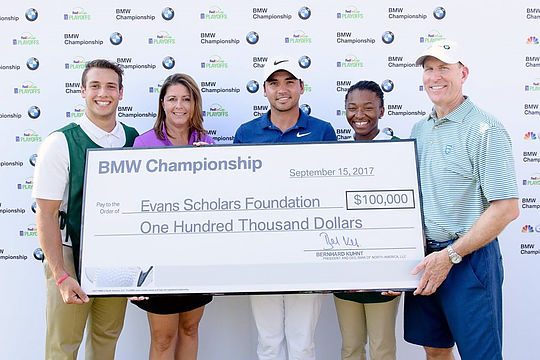 Day used a 6-iron to clinch the keys to a gleaming new BMW 760i that was parked behind him on the tee.

But then in a great gesture Day graciously donated the new BMW to the Evans Scholars Foundation — further supporting its mission of sending hard working caddies to college and a goal of having 1,000 caddies enrolled annually in college by 2020.

“On the TOUR we aim to give back. For BMW to give back as well and put a student through college is huge,” said Day.

“I’m going to donate the car to help an additional student because I am in a fortunate position, and being able to not only impact another person’s life but to also get them through college is huge as well.”

Since 2007, BMW has contributed more than $24 million to the Evans Scholars Foundation. Day’s shot marks the fifth time BMW has awarded a Hole-in-One Scholarship in a player’s name.