Day has come close twice in his seven appearances at Augusta National to winning the most sought after item of clothing in all of golf.

The first was on his Masters debut in 2011 where he remarkably finished second only to see South African Charl Schwartzel birdie his closing four holes to claim victory.

Two years later, Day was leading the 2013 Masters with three holes to play only for fellow Australian Adam Scott to emerge as the first Australian to win the Masters.

And now after his play-off victory earlier this year at the Farmers Insurance Open, Day cannot be discounted in becoming the second Australian-born player in five years to win at Augusta National.

“In looking back from 2011, having good results and in 2013, and still having decent results in there between, this is a tournament that I always focused to try and win every single year, and I’m striving towards hopefully one day slipping that Green Jacket on and being able to call myself a Masters champion,” said Day.

“If I sit there and think about it every night, it gives me chills just trying to think about that actual feeling. So it always gets me focused and ready to come into an event like this.” 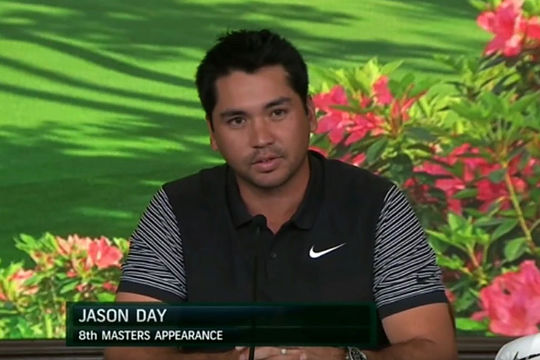 Day is among just a small contingent of four Australians including Scott, Marc Leishman and Cameron Smith, contesting the year’s first Major. They join a long list of Aussies who have teed it up at the Masters since Jim Ferrier became the first at Augusta National in 1940.

And it prompted Day to be asked by the Australian-born moderator of his interview what it had been like for Day growing-up in Australia watching TV coverage of the Masters.

“It is big event for Australians watching the Masters on TV because I think the biggest thing is that we have come so close so many times beforehand, and then obviously with Adam Scott winning, it just made everything so much more special,” he said.

“You would go down the golf club, you’ve got breakfast going on, you’ve got the Masters playing, very early in the mornings.”

“But when I was growing up, I remember waking up at four, five o’clock and just sitting there waiting for the Masters coverage to come on, and I’m sitting there turning the TV with the turn dial and making sure that the antennas are right just to get the best picture, because just everything ‑‑ you walk through the gates here, I think everyone knows and understands how special this place is when they walk through, and then obviously too as a kid watching it, watching it unfold in 1997 with Tiger and how he played, that’s what sparked my kind of push forward into playing more competitive golf.”

“So, I absolutely love this event.”

And Day spoke of his decison to have good friend, Rika Batibasaga on the bag with Rika, who was on the bag when Day won at Torrey Pines but who will be caddying at Augusta for the first occasion.

After long-time coach, Colin Swanton stepped down as caddy, Day has alternated the caddying duties between Batibasaga and Luke Reardon.

“This week we won’t go over the numbers because I know how thorough Colin is with being here,” said Day, who retained Swatton as his coach and has him at Augusta National this week as well.

“That can add a little bit more pressure. So hopefully I have my good close buddy out there with me and we can make things a little less stressful and go out there and have fun.”