Day goes from hospital bed to co-leader at Barclays

The Australian had tweaked his back a day earlier, a combination of pushing a broken-down motorised cart out of the way and removing a box from underneath the family motorhome.

Day left St. Peter’s Hospital here in New Jersey having undergone an MRI on his back and got up and walked out given the all-clear advice ‘everything was structurally sound’.

The 27-year old is now standing tall, and a Major Champion, having birdied the last hole in a blistering round of a seven under par 63 to be sharing the lead on 11-under par and seemingly fearing nothing with a round to play in the Barclays Championship and the opening event of the FedExCup PlayOff Series.

And with a round to play, Day is on the verge of capturing a fourth PGA Tour success this season after earlier this year taking out the Farmers Insurance Open and more recently the RBC Canadian Open, just a fortnight before his Whistling Straits triumph. 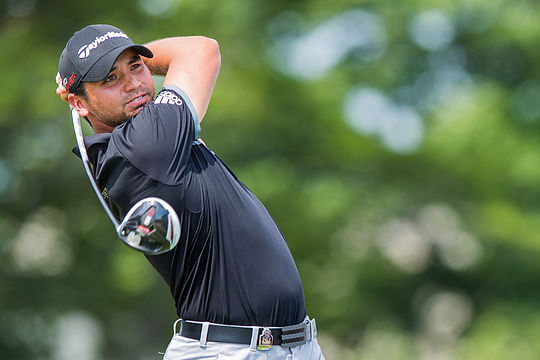 “I haven’t got, and while it’s hard to stay present, I’ve just got to get some rest tonight and kind of come into tomorrow’s round and be patient out there.”

“I’m shooting for my fourth win of the season, so I can’t really get ahead of myself, and I’ve just got to not be satisfied with the score that I’m at.”

And the great thing is that any back concerns Day might have to deal with have been negated by the sauna-like conditions that have prevailed for the better part of the week on the Plainfield Country Club course.

“The back is fantastic, and I just love the heat, and while the back is stiff in the morning, the back really is a non-issue,” he said.

“It’s a little tight but when you have back spasms and everything kind of locks up, it’s kind of a granted that it’s going to be tight over the week.”

“But to be able to have hot weather is huge. My body is a totally different body on the West Coast Swing compared to the summer swing over here on the east coast.”

“And it’s not to the point where my back is stopping me from hitting 300-yard plus drives, so I have to be happy with that.”

And Day will be happy Jordan Spieth is not around to test his mettle as the American had done a fortnight ago along the shoreline of Lake Michigan.

Instead he will play the final round of the $US 8.25m event in the company of likely Presidents Cup teammate, Bang Sae Moon.