Jason Day has an excellent sense of humour and, thankfully, he has a fairly thick skin as well.

Otherwise the popular Aussie may have taken offence to some of the ‘barbs’ that have been aimed his way since his withdrawal from the Arnold Palmer Invitational recently due to a back injury midway through the first round. 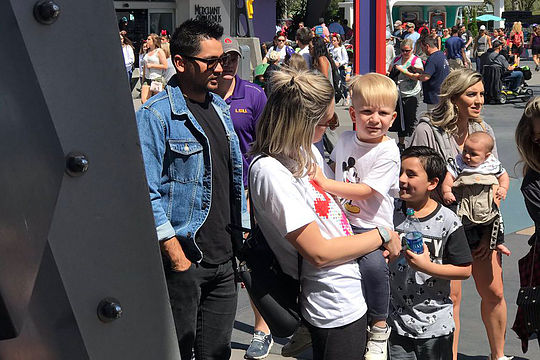 Jason Day enjoying a day out with the family at Disney World (Credit:@Kevin_Caverly)

Day was spotted at Walt Disney World with his family the day after withdrawing from the event, with photos posted on Twitter of the former US PGA champion and his family at the Magic Kingdom.

“Tremendous photo of me. I actually liked it,” Day said. “But it was kind of creepy, just on the side.”

Day played in last week’s Players Championship – and was in contention as he played alongside the eventual winner Rory McIlroy in the final round.

Yet he admitted he’d had four cortisone injections in and around his spine to enable him to play, pain-free – at Sawgrass.

“Like, if people make memes about me, I think a lot of them are funny,” Day said. “It’s fine…it is what it is.”

“People trying to be funny and that. I get a good laugh out of it and I’m okay with that.”

“It’s unfortunate, but it just reflects what they are as a person.”

Day likened the whole thing to a familiar childhood experience.

“It’s like when you’re going through school and you get bullied,” Day said.

“I mean, I got bullied a lot at school, but it’s just words. So you’ve just got to take it on the chin and just get up and go again.”