Australia’s Jason Day will be hoping his mother’s special ‘salty chicken’ and what he describes as a ‘Heart Attack in a Box’ will lead to victory an emotional charged victory in the World Cup of Golf in Melbourne.

Day overhauled third round leader Thomas Bjorn of Denmark with three birdies in his closing six holes in a score of a three under par 68 for a nine under par tally on yet another bright but testing day on the Royal Melbourne course. 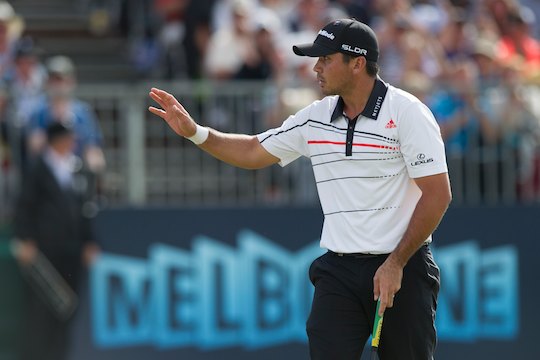 Jason Day will take a one stroke lead into the final day of the World Cup at Royal Melbourne (Credit: Anthony Powter)

Bjorn let slip his grip on the ‘Individual’ trophy with a level par 71 to remain at eight under par and with American Matt Kuchar shooting a 68 to be in third place at six under par.

Day and fellow Australian Adam Scott also lead the ‘team’ event by one shot with Scott recording a second straight 68 to be just ahead of the defending USA side of Matt Kuchar (68) and Kevin Streelman (74).

Day arrived back to Australia with tragic news of the death in the Philippines of his grandmother, six young cousins and an uncle at the hands of Typhoon Haiyan.

His Pilipino-born mother, Dening travelled down from Brisbane late on Friday night and met with her US-based son at 8am local time Saturday.

“It was great to catch-up with my mum but then I only saw her briefly as I had to go to the golf course and get ready for my round but I hung out in her room for about 30 minutes,” he said.

“She also brought some chicken down for me. She makes this special chicken, it’s called ‘salty chicken’ but I pretty much call it ‘a heart attack in a box’.

“I haven’t had it for a while and if I don’t show up for the round tomorrow you know that I am probably laying in my bed. (smiling)”

“But it was just good to see her as I am glad she got to come out to the golf course.”

”She and about eight of my family will be out there tomorrow so it promises to be a very special last day.”

And while Day has won three times in his professional career, including his 2010 Byron Nelson Championship victory on the PGA Tour, he strangely has not tasted victory in Australia since capturing the 2006 Queensland Amateur title at the Burleigh Heads Golf Club on Queensland’s Gold Coast and just shortly before turning professional later the same year.

“It would be phenomenal to win my first professional event in Australia and to be playing here at Royal Melbourne in front of the calibre of players competing this week, and given how tough the course is, and how big a tournament this is would be amazing,” he said.

“I would definitely welcome victory with open arms should it fall into my lap.

“And if Adam and I were to win the ‘Team’ prize then that would be a complete honour given Australia’s Kel Nagle and Peter Thomson won the World Cup of Golf for a first time here at Royal Melbourne here in 1959.

“That would be a complete honour and to bring back the World Cup of Golf here to Australia, in front of the Melbourne sporting crowd here at Royal Melbourne would very, very special.”