Day: If You Don’t Like The Course, Don’t Show Up

World No. 1 Jason Day had a simple message for his fellow competitors worried about the toughness they will face in this week’s 116th US Open at Oakmont.

Day’s message was very much to the point and that’s if you don’t like the golf course, then don’t bother teeing-up. 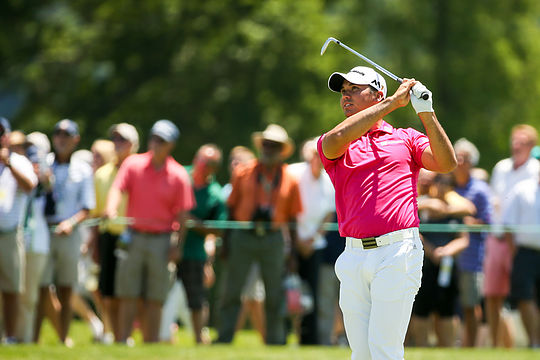 Jason Day during a practice round for the 2016 US Open (Credit: USGA/Darren Carroll)

“I’ve always said it ever since I started playing major golf, is that you have to come in to Major Championships and your attitude has to be on point,” he said.

“You have to have a good attitude regardless of what situation is.”

“I mean, you saw it last year at Chambers Bay with a lot of the professionals complaining about the greens. That just doesn’t help. This year, we got tough rough. The greens are tough. Practically the whole course is tough.”

“You just got to go with it and try and play your best and hope for the best sometimes attitude is huge. I think when you’re in stressful situations like you are at US Opens, where this is usually the toughest course we play every single year, you have to come in with a positive attitude regardless of what the outcome is.

“If you miss a cut, it sucks, but you’ve got to come with — if you’re going to have a bad attitude, you may as well not even tee it up that week because you probably won’t play good anyways. That’s just one less person you have to worry about at the end of the week.”

Day not only tees-up this week as the game’s top-ranked player but he enjoys an impressive US Open record including four top-10s in his five appearances.

The Queenslander was a distant second to Rory McIlroy on his US Open debut in 2011 and while he shared 59th place a year later at the Olympic club, he was tied second a year later at Merion and since then was fourth in 2014 at Pinehurst and ninth a year ago at Chambers Bay.

However it was memories of Chambers Bay when during the second round Day collapsed on his 18th hole, and the 9th hole on the course. Day was very slow to get back up and was shaking and wobbly. It was later revealed that suffered vertigo, a diagnosis Day had received from his doctor a month prior.

However, the very next day, when he wasn’t even sure if he would play, Day ended the third round tied for the lead before eventually ending inside the top-10.

And in arriving at Oakmont with a cold, he was asked to explain his well-being this year compared to a year ago when he collapsed so dramatically.

“You can’t control vertigo and stuff like that,” he said.

“With people that have vertigo, they kind of understand what I kind of went through. But battling a — I mean, this shouldn’t be a news and noteworthy that I’m battling a cold. I’m at the back end of a cold. You can probably hear it in my voice, but I’m fine. I’m going to do fine. It’s not an excuse. I’m going to be ready for the start Thursday.”

“It’s just that things happen. I was just going to say that I’ve never been more stressed in my life than right now.”

“It’s just because being No. 1 in the world, having a lot of expectations on you, having to practice so hard to keep that No. 1 spot, trying to win as many tournaments as I can puts a lot of stress and pressure on your shoulders.”

“Sometimes your immune system gets a little heated, and you’re more susceptible to getting some illnesses that way. It doesn’t help that my father-in-law was sick during the Memorial, so that kind of passed it along to me.”

“So it is what it is. People ask me how I feel, I usually tell them how I feel, and that’s just me being honest. I’m not trying to make any excuses this week.”

“I just want to know that I was battling something. And usually, I tell people how I prepare. Unfortunately, I didn’t get to prepare Saturday, Sunday, but I feel pretty rested, which is a good thing for me.”

“But then I’m going to need that rest this week with how tough the golf course is. So I’ll be ready come Thursday.”

Only two Australian’s, David Graham in 1981 and Geoff Ogilvy in 2006, had held aloft the gleaming US Open trophy.

There’s been plenty of Australians who have been runner-up including the late, great Kel Nagle in 1965, Bruce Crampton in 1972 while Greg Norman was second in 1984 and 1995.

But then Day has had to settle twice being the US Open bridesmaid first to McIlroy and then sharing second with Phil Mickelson in 2013 at Merion.

It’s little wonder, and despite being the reigning PGA Champion, that Day believed his best chance of winning a Major growing up would be the US Open.

“I needed to — if I didn’t have a short game, I would shoot over par, and I’d play bad. If I had my short game, I’d shoot under par somehow, even though I was hitting in the trees and hitting it everywhere.”

“I finished second twice, and I can’t remember how many top tens I’ve had in the US Open, but I feel like — it’s been four. So I feel like that sets up well for me.”