Day in historic US Open performance under adversity

A lion-hearted performance from an ailing Jason Day throughout a hot, breezy day at Chambers Bay has him tied for the lead for the U.S. Open Championship as the close of play draws near.

In what was most certainly one of the great U.S. Open performances and an inspirational Australian sporting story given the circumstances, Day finished his round in spectacular style with four birdies in his final seven holes. 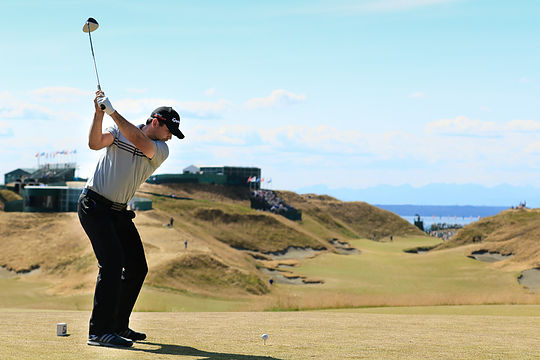 Jason Day tees off on day three of the 2015 US Open (Credit: www.golffile.ie)

Day carded a back nine of 31 for a two-under par 68 that placed him at four-under, tied at this point with Dustin Johnson, Jordan Spieth and Branden Grace who still had holes remaining in their third round.

After his collapse with vertigo after round two, it was touch and go whether the Queenslander would be able to recover sufficiently to make his 1.55pm tee time today.

Armed with medication and a numberof physical strategies to maintain his equilibrium and avoid dizzy spells, Day gingerly warmed up under the transfixed glaze of a throng of watchful eyes on the range and short game area.

Day told playing partner Kevin Kisner before the round that he was still not feeling well but what followed was nearly five hours of pure heroism.

Day was clearly debilitated but bounced back after a two-over front nine using a combination of skill and unique fighting qualities that have him on the brink of his first major championship.

“I didn’t feel that great coming out early, and then felt like — I felt pretty groggy on the front nine just from the drugs that I had in my system, then kind of flushed that out on the back nine,” Day said in a short interview following the round away from the bulk of the media.

“But then it kind of came back, the vertigo came back a little bit on the 13th tee box, and then felt nauseous all day. I started shaking on 16 tee box and then just tried to get it in, really. Just wanted to get it in.”

“Last year I didn’t play the round after I had vertigo and this one was worse. I think the goal was just to go through today and see how it goes.”

Day was then whisked from the premises by manager Bud Martin to receive further medical treatment and rest ahead of what will be another monumental personal challenge tomorrow.

Should he pull off the feat tomorrow around this most arduous of journeys at a flint hard Chambers Bay, it would at the very least rival the performance of Tiger Woods in winning the 2008 U.S. Open over 90 holes at Torrey Pines, playing with the intense pain of a broken leg.