Aussies Jason Day and Matt Jones sit on 9-under the card to share the second round clubhouse lead at the PGA Championship.

Play was suspended on day two due to adverse weather at Whistling Straits on the banks of Lake Michigan. 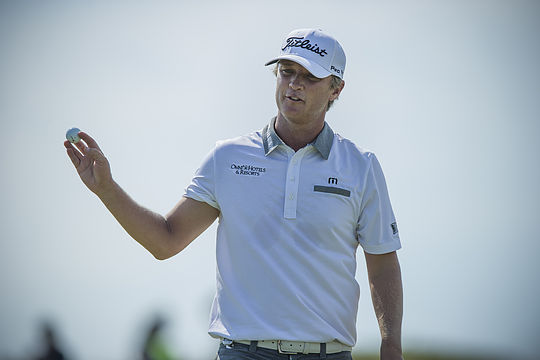 Matt Jones waves to the crowd during round two of the 2015 PGA Championship (Credit: Anthony Powter)

A ferocious storm late in the day ripped through Wisconsin forcing the suspension of play and leaving the Aussies yet to finish their second round.

Jones has fired five birdies so far and is yet to make a mistake with his card currently bogey free. Day also looks solid with six birdies and a single bogey.

Day was on the par-4 15th hole when the siren went off just after he hit his second shot. Jones, starting on the back nine, had just hit his tee shot on the fourth hole.

Overnight leader Dustin Johnson posted three bogeys in four holes before the weather closed in, falling back to five under par. Rory McIlroy rescued a double at 18 with an eagle two holes later at the second, finishing on 2-under par after a second successive 71.

Jordan Spieth shot a 5-under 67 to climb to 6-under. He scrambled around the course nicely on Thursday but found things easier today. The world number two finished with six birdies and a lone bogey at the par-3 12th hole.

Cameron Smith in just his second major looks set to play the weekend as the Queenslander fired a second round of 4-under 68 to move up the leaderboard and is currently T28 on 2-under the card, four shots within the projected cut.

Adam Scott, John Senden, Steven Bowditch will be packing their bags with Scott firing rounds of 76-75 to be 7-over to miss the projected cut, the first time the world number 11 has missed the weekend at these championships since 2009.

Tiger Woods was 4-over, two shots away from the projected cut of 2-over with five holes left to play.

A total of 58 players return today to complete their second rounds.