Day keeping the World No.1 dream alive at BMW

Turning to page 22 there is the feature story headlined – Exceptional Day. 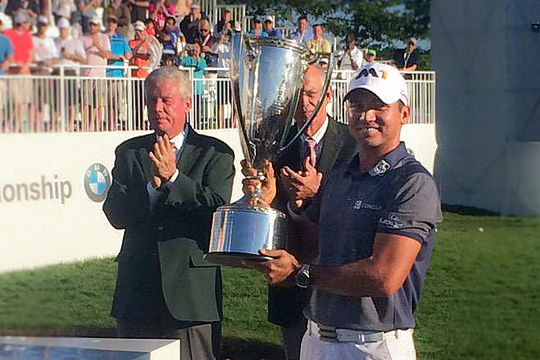 Victory a year ago, or to be precise on September 25th, 2015, not only presented day with his second straight FedEx Cup Playoff title but also handed the Queenslander the World No. 1 crown.

Day had virtually wrapped-up last year’s championship after just two days at Conway Farms, signing for rounds of 61 and 63 to tie the PGA Tour’s 36-hole scoring record of a 124 tally. He added back-to-back rounds of 69 over the weekend to cruise to victory by six shots.

Rewind eight years to 2007 when Day gained his PGA Tour card. He hosted in a conference call with members of the Australian golf media and declared by age 22 he would become World No. 1. He had conducted the call from his mother’s bedroom but thought to himself, ‘That might not go over so well’.

Day would need to wait another six years before realising his dream of capturing last year’s BMW Championship, and at the time revealing how he’d been dreaming of becoming the game’s best golfer since 2000.

“At age 13 that’s when I started really thinking about one day being No. 1 in the world,” he said.

“I thought about playing competitive golf more, but once I started playing golf, reading the book about Tiger Woods, watching him win in ’96, also, but I always thought, I think I could turn pro when I was 14, 15 years old, but I always — once I got to turning professional, I said, okay, now I want to try to accomplish getting to No. 1 in the world, and that’s kind of — around 18 years old when I really wanted to kind of push for that.”

However, Day’s reign as No. 1 was short-lived with Jordan Spieth taking back the title at the Tour Championship before Day regained the crown a month later on October 18th to keep the top spot for a further three weeks.

Spieth took back the title on November 8th and would remain at the top for a further 20 months until March this year when Day captured the WGC – Dell Match-Play in Austin, Texas.

Since then Day has ruled the world for an unbroken 24 weeks and 28 weeks in total.

Seven year ago, Day’s World No. 1 dream may have smacked of youthful enthusiasm but then in first reaching the top of his chosen sport Day had a message for those doubters.

“It’s okay to dream big. It’s okay to say what you want to do. And for people that don’t respect that, then you really don’t need to give them the time, because who am I or who are they to tell you that you shouldn’t be able to do something, and to be able to sit up here today, No. 1 in the world, looking back when I was an 18 year old kid, very full of confidence, there’s not much I would say.”

“I would still thank them because that was kind of the fuel that lit the fire for me, especially with the dedication over these last few years because I know that a lot of people were thinking against me on that. I’m glad I accomplished it.”

And Australian golf is also rightfully proud of Jason Day’s accomplishment and long may he reign as World No. 1.