(Accordia Golf Narashino Country Club, Japan:) It was a case of Aussies Rule with Jason Day scooping the $100,000 18th hole skin for a $210,000 winner’s purse in capturing the inaugural Japan Skins.

The event finished under lights but it was Day who shone the brightest winning eight skins at the Accordia Golf Narashino Country Club in Japan, while Tiger Woods and Rory McIlroy secured five and four skins, respectively, but both won $60,000.

“It was great. I think the back and forth was nice and I honestly think we all played some pretty nice golf out there, so hopefully the fans enjoyed it on TV around the world,” said Day.

“I think overall it was a lovely afternoon, evening. First time I ever finished under lights, so that was exciting.” 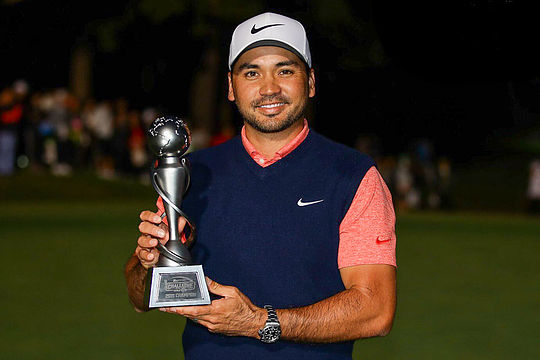 The quartet were competing for a total purse of $350,000 and here is how the prize money broke down per hole:

Woods was given the honour of teeing-off first and followed by Day and then was there was the loud call of ‘Fore Right’ when McIlroy teed-off with a poor drive, and then followed by Matsuyama.

The opening two holes were halved before it was Day to strike first in picking-up $30,000 for a winning birdie at the third hole.

Woods and McIlroy halved the fourth with pars with McIlroy missing his birdie putt and leaving himself a testy 3-footer for par.

At the par-3 5th hole, Day and McIlroy found water off the tee while the 81-times PGA Tour winning Woods did a mini-Kevin Na and walks it in despite some trash talk from his competitors trying to get in his head to win the $20,000 skin.

Day, McIlroy and Matsuyama all managed birdies on the sixth, meaning the prize money rolled over once again while at the par-3 seventh hole the golfers teamed up with rugby legends in a scramble format in honour of the Rugby World Cup.

Finally, McIlroy got in on the action at the par-4 12th, recording a birdie after a fine shot from the tee that left him with a straightforward putt and pick-up four skins worth a total of $60,000 to join Woods with the most cash so far.

Matsuyama then joins the other three on the scoreboard at the 13th with what will be his only skin after converting his putt from eight feet while McIlroy lipped-out from six-feet.

The 14th, 15th and 16th holes were halved with Day nailing his 12-foot par putt at the 17th, and with McIlroy missing from six-feet, for the Aussie to add another $80,000 to his bank account.

All four players remained in contention to win the day at the 18th, but a birdie from Day saw him almost double his purse and secure victory.

McIlroy was asked after the match if the course suited his aggressive style of play.

“For the most part…especially with the way the course was set up, we could fire at some pins. Yeah,it’s good fun. I mean, there’s probably a few holes out there where during the tournament this week we probably won’t hit driver, but it was nice to get driver in our hands and have a hit and have a bit of fun,” he said.

“It was still quite competitive out there. I was definitely rooting for Tiger to hole that putt on the last and go to that extra hole, but it was really good fun. Just really glad to be a part of something like this in Japan. It was a great way to kick off the week.”

Woods summed-up the outing saying: “Well, I enjoyed just being out with these guys and I think that we all put on a pretty good show. No one got shut out, which was great, and I think we made a few birdies.”

“I learned the golf course a little bit on the fly and we got it in, which is great.”