The Aussie duo of Jason Day and Marc Leishman are poised to end a 22-year Australian-born victory drought in golf’s oldest major.

Greg Norman was the last Australian to win The Open in 1993 at Royal St. Andrews where he was handed the Claret Jug by the late Gene Sarazen with Allan Border’s winning Test team in attendance. 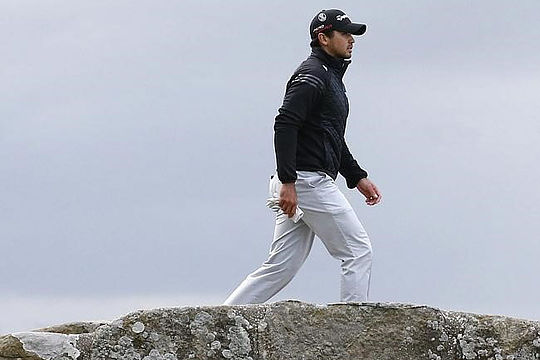 Jason Day is tied for the lead heading in to the final day of the 2015 Open Championship (Credit: www.golffile.ie)

Day now finds himself thrust into a head-to-head battle with American superstar Jordan Spieth over the final round at the Home of Golf.

The Queenslander is in a three-way share of the lead at 12-under with South Africa’s 2010 St Andrews champion Louis Oosthuizen and Irish amateur Paul Dunne – and with 22 other rivals bunched within five shots of the lead.

Recovered from the vertigo attack that wrecked his US Open chances last month, Day will bid to join Peter Thomson, Kel Nagle and Greg Norman as Australia’s Open kings.

But to prevail he will have to deal with his own nerves, Spieth and a chasing pack which includes compatriots Adam Scott, Marc Leishman and Steven Bowditch as well as major winners Spieth, Padraig Harrington, Retief Goosen, Justin Rose, Charl Schwartzel and Zach Johnson.

No Australian has triumphed at the Open since Greg Norman in 1993 at Royal St George. Kel Nagle in 1960 is the most recent Australian to be crowned on the Old Course – the home of golf.

Day, 27, has already been runner-up three times at the majors – twice in the US Open and once at the Masters.

Having watched fellow Queenslander Scott’s coronation at Augusta two years ago, Day wants his own piece of history in golf’s most revered site.

“I always wanted to be the first Aussie to win the Masters, but you know, Scotty beat me to it,” he said.

“Since we haven’t had an Aussie win the Claret Jug since Mr. Norman, it would be nice to put my name on the Jug.”

“We’re just trying to chase that bit of immortality.”

“That’s probably the best way to put it is just that you’re stuck in history at that moment, and you know that that year, that person’s name on that Jug is immortal in some way.”

“It’s just great to be able to have that piece of history and that glory that goes along with it.”

Day is acutely aware Spieth is also on history’s trail, bidding to become the first player since Ben Hogan in 1953 to lift the season’s first three majors.

The Texan prodigy charged into calculations with a stunning six-under 66 in the third round to trail by one shot.

“I can’t control what he does,” Day said. “He’s just playing phenomenal golf. If you look at the run that he’s had this year, it’s been amazing.”

“He’s a heavy favourite tomorrow, just being one shot back. Everyone knows it. The only thing I can do is just go out there and try to play the best I can.”

“Fortunately for me I shot 5-under and I’m at the top of the leaderboard right now. I kind of have to do the same tomorrow.”

WA’s Greg Chalmers and Sydney’s Matt Jones are high on a cluttered leaderboard at six-under, a stroke ahead of Marcus Fraser and Geoff Ogilvy.

Day believes Day, Leishman and Bowditch – and other Australians, too – will certainly figure.

“I’m just looking forward to a good challenge tomorrow, and I think the guys are hoping for a good finish.”