Whatever Tiger Woods told Jason Day it is certainly working after Day completed a brilliant up and down from a bunker at the 18th to claim the PGA Tour Arnold Palmer Invitational with a wire to wire victory on Sunday.

Day admitted that he was not at the top of his game, but he did enough to clinch his sixth victory in his past 12 starts on the PGA Tour.

“Just be yourself and stay in your world” the text said and it was what Day was after to elevate his confidence for the final round.

“It’s so — it gives me so much confidence that a person like that would believe in me,” said Day.

“I was idolising him ever since I was a kid and watching him in ’97 win the Masters for the first time and all of a sudden I’m playing the Tour and I’m pretty close with him now. I feel we’re good enough friends where I can ask anything and he’ll give me a straight answer.” 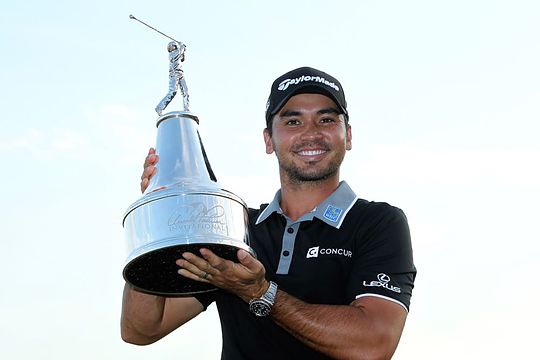 Another of golf’s traditions yesterday put a smile on Day’s face when he was congratulated by Arnold Palmer, 86, on the greenside.

“I was able to walk up there and have a special moment with the King,” Day said. “That’s something I always wanted to do.”

Sunday’s victory has also left the winner of the season’s final major of last year in prime shape for the first one of this year, the Masters starting April 7.

With Adam Scott also in hot winning form, this year’s Masters is shaping up nicely for the Aussies. It is the third time in four events an Australian has won on the US circuit, with Scott having triumphed at the Honda Classic and WGC-Cadillac Championship.

A reference to the fine run has been labeled the ‘Florida Aussie swing’, and between Scott and Day the Masters cannot arrive quickly enough for expectant Australian golf fans, or Australian golfers. The stage is set wonderfully for the year’s first major.

Scott wasn’t in the finish at Bay Hill finishing in a tie for 12th, but you could not expect him to continue to burn at the rate he has over the last few week.

Scott’s form was and continues to be scintillating and any negative remarks about the world’s No.6 putting with the short stick should be quickly discarded.

Day climbs from world No.3 to No.2 and will now go into this week’s WGC-Match Play Championship – an event he won in 2014 – ranked just fractions behind No.1 Jordan Spieth.

Marc Leishman was the next best Aussie closing with a 69 to finish at eight-under, in a three-way tie for 17th.