(Old Westbury, Long Island, NY:) The Queensland duo of Jason Day and Cameron Smith declared suggestions on Australian news websites that the Queenslanders may play an exhibition match later this year is very much ‘fake news’.

A leading Brisbane newspaper reported Monday the idea of staging an 18-hole winner-take-all match at Royal Queensland, Smith’s home club, as an idea to entice Day back to play golf in the Sunshine State for the first time in six years. 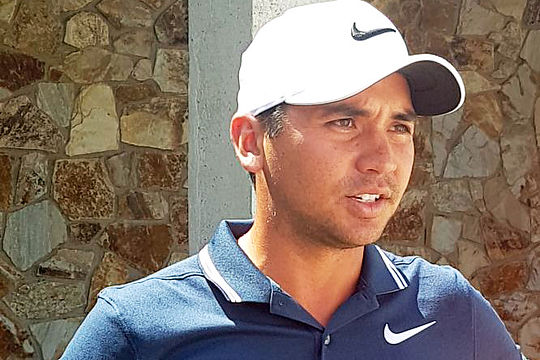 Jason Day talks to the media following round one of the Northern Trust Open (Credit: GolfByTourMiss)

Even PGA of Australia CEO Gavin Kirkman has been quoted saying: “It would be a good idea” when asked to comment on suggestions of a Day vs Smith one-off showdown in their home State around the time of November’s Australian Open.

However, no-one has informed, discussed or approached Day according to his long-time manager and the current World No. 9.

“The first I heard about some sort of match with Cam was arriving here yesterday,” said Day immediately following his opening round 69 in the Northern Trust.

“I have heard nothing about it. So, it’s all fake news as far as I am concerned.”

And Smith also poured cold water on suggestions of any exhibition match after signing for a disappointing five-over par 75 on the first day of the $US 7.85m event at Glen Oaks on New York’s Long Island.

“I was asked my views about an exhibition match and all I said was I liked the idea,” said Smith.

“But then I’m like Jason as it’s just fake news.”