A birdie on the last hole has given Jason Day a one stroke lead over Lucas Herbert heading into the final round of the Australian Open in Sydney tomorrow.

Day fired rounds of 66-68-68 to finish on 10-under. The former world number one made his move over the back nine today with birdies at 14, 15 and 18, with a bogey on the 17th after finding the green side bunker, his only blemish for the round. 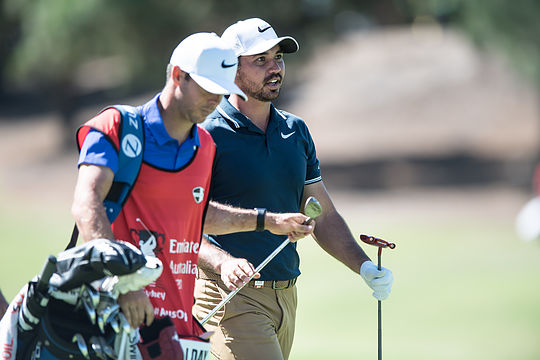 “To have a one stroke lead heading into the final round is a great place to be,” said Day, who is making his first appearance back in Australia since 2013 and looking for his first Australian Open title.

“I’ve just turned 30 and haven’t had a win for a while. It’s a great place to be in, back home, in front of the crowds and to be in contention to win our national open. I’ll be nervous, but it’s an exciting type of nervousness and I’ll be giving it my best go.”

“I think anything in the 60s tomorrow will seal the deal. I just need to focus on the golf course and not do anything too crazy.”

Herbert in contrast to Day’s impressive closing back nine made double on the par-3 11th after having a two-stroke lead over Day only to see that evaporate when he could not find his ball in heavy bushes after flying the green.

To his credit Herbert was able to gain a shot with a birdie on the 14th to minimise the earlier damage, but was not able to capitalise on a number of birdie putts coming down the closing stretch.

He narrowly missed a birdie at the reachable par 5 18th, a hole most of the field capitalised on.

Despite being a shot behind, Day sees the 21-year-old Victorian as his main threat heading into the final round.

“Lucas has an impressive game, his short game is good and he’s long off the tee. He’s the one I’ll need to watch tomorrow as I was impressed with his game out there today.”

Sweden’s Jonas Blixt stormed up the leaderboard firing a 5-under-par 66 to move into a share of third position at 7-under along with local Matt Jones.

The day’s low round was recorded by a Japanese amateur, Takumi Kanaya, with a 6-under 65, which has him sharing the low amateur for the tournament at 4-under alongside Victorian Matias Sanchez.

Defending champion Jordan Spieth never looked like getting his game going, shooting a 1-under 70 to be eight shots behind Day with a daunting task ahead of him tomorrow to win his third Australian Open in four years.