In one of the more emotional off-course scenes in many a decade, Jason Day had tears streaming down his face in revealing he has withdrawn from the defence of his WGC – Dell Match-Play Championship after revealing his mother is to undergo life-saving lung cancer surgery on Friday.

Day’s father, Alvin, was Australian, and Dening was born in the Philippines before they moved to Australia in the early 1980s. 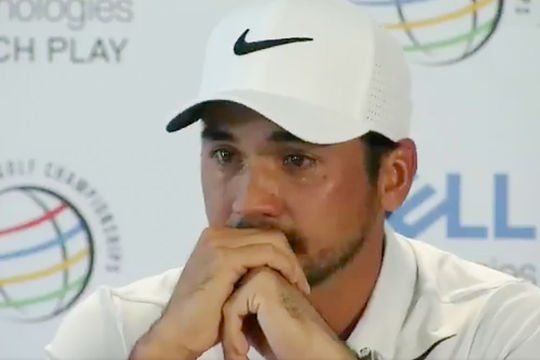 At first it was thought Day had withdrawn after six holes in his match against American Pat Perez due to on-going back issues.

However soon left everyone in the Austin Country Club media centre in revealing the extent of his concern for his mother, Denning

“Yeah, obviously it’s not an excuse or anything like that. My back is fine. I’m a hundred percent healthy. Everything is totally fine. It’s hard to talk right now,” said Day wiping tears from his eyes.

“My mom has been here for a while. And she has lung cancer. At the start of the year she was diagnosed with 12 months to live — this is so hard. The diagnosis is much better being over here.”

“She’s going in for surgery this Friday and it’s really hard to even comprehend being on the golf course right now because of what she’s gone through. She had a test done in Australia, and the doc said she was terminal and only had 12 months to live.”

“I’m glad I brought her over here. And it’s been really hard to play golf lately in this year. It’s been very, very emotional, as you can tell. I’ve already gone through it once with my dad. And I know how it feels.”

“And it’s hard enough to see another one go through it, as well. So as of now I’m going to try to be back there with my mom for surgery and make sure everything goes right with her. I mean, once again it’s been a very, very hard time for me to even be thinking about playing golf. And emotionally it’s been wearing on me for a while.”

“And I know my mom says not to let it get to me, but it really has. So I just need some time away with her to make sure that everything goes well because this has been very, very tough for me.”

“So I’m going to do my best and try and be there the best I can for her because she is the reason that I’m playing golf today. I didn’t want to leave you guys out in the dust and try and speculate what was going on with me and my game and how I felt, if it was my back or anything.”

“But I just wanted to make sure and get it out there that this is the reason why I’ve obviously pulled out this week because of my mom going for surgery to try and get rid of this mass that’s in her lungs, which is a three or four centimetre mass.”

“I’m hoping for a speedy recovery for her, and we can get this behind us and she can live a long, long life.”

Day left the room to be embraced by his wife, Ely.