Day unequivocally the best in the world

Jason Day’s win at The Players did much more than just further swell a bulging bank account and the gap to the next best in the Official World Golf Rankings.

It was a big step for the Queenslander, winning for the first time when ranked No. 1, and reaching double figures in PGA TOUR wins (10) when it seemed not that long ago that he was treading water with just one victory in the 2010 Byron Nelson Classic. 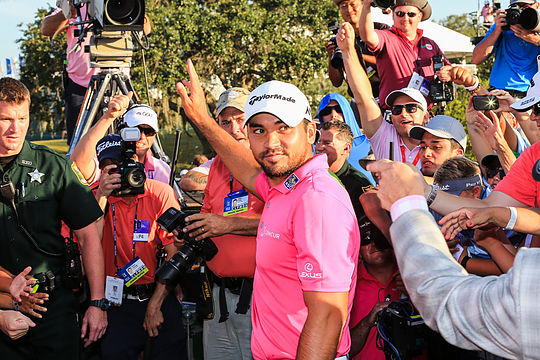 Jason Day mobbed by the media after his win at the 2016 Players Championship on Sunday (Credit: www.golffile.ie)

He also knows winning such prestigious events as The Players may see him joining many of his idols in the Hall of Fame one day.

Adam Scott called Day’s recent form ‘Tiger-esque’ and the imposing figure he is rapidly ascending to on course seems to be having a similar effect on those mentioned in the same sentence as him as one of the ‘Big Three’ in world golf.

In his first start back from a meltdown of epic proportions on the back nine at Augusta in April, No. 2 Jordan Spieth was paired with the rampant Australian over the opening two rounds and was left reeling, not unlike when he threw his Sunday best at Day but came up short on the final day at Whistling Straits at the PGA Championship last year.

Spieth missed the cut at The Players and a prominent factor in that result was Day’s presence.

“It’s tough when you’re getting shellacked by 15 shots in the same group, you know?” said Spieth, “When somebody’s birdieing almost every single hole, every other hole, you start to wonder why in the world you aren’t making all of them.”

“For me, it was tough this week, without my putting being on. It just led to a lack of patience for me, seeing every hole being birdied and not being able to do much about it.”

The other member of the supposed great triumvirate – Rory McIlroy – put up a creditable performance to tie for 12th place but told all who would listen that things were ‘just not clicking’ for him.

This was especially so on the greens where the Irishman is still coming to terms with his left hand below right method he adopted several weeks ago in his quest for his first victory of 2016.

Both have their work cut out over the summer to lift their games to match the level being set by Day, who has a point to prove in a few weeks’ time at the U.S. Open at Oakmont after being hamstrung by health issues when well positioned at Chambers Bay last year.

For so many years, the Queenslander had openly expressed his desire to reach the number one ranking one day and to emulate the feats of the people he looks up to in Tiger Woods and Greg Norman, who were both dominant world number one players for extended periods.

After the events at Ponte Vedra Beach this past week, Day has joined a level that Woods and Norman reached in that he is unequivocally the ‘best’ player in the world right now, not simply the number one ranked.