The 26-year-old Queenslander withstood a determined Frenchman Victor Dubuisson to triumph with a birdie at the 23rd hole of a thrilling final at the Dove Mountain course in Arizona.

The victory sees Day moving from No.11 to No.4 in the world rankings, behind only No.1 Tiger Woods, No.2 Adam Scott and No.3 Henrik Stenson.

Dubuisson, 23, who came to prominence after defeating Justin Rose and Tiger Woods to capture the Turkish Open last November, made a slow start in the final but came home storming with a series of unbelievable shots to keep in the match.

Day was three up through 12 holes but world No.30 Dubuisson rallied to send the match to extra holes and then made two stunning recovery shots from rocky, desert lies on the 19th and 20th holes before finally succumbing on the 23rd when Day holed his four-foot birdie putt.

“The biggest thing (I was thinking) was, just how much do I want it, how much I want to win?”, said Day.

“I kept visualising myself with the trophy last night. I’ve never wanted something so bad in my life.” 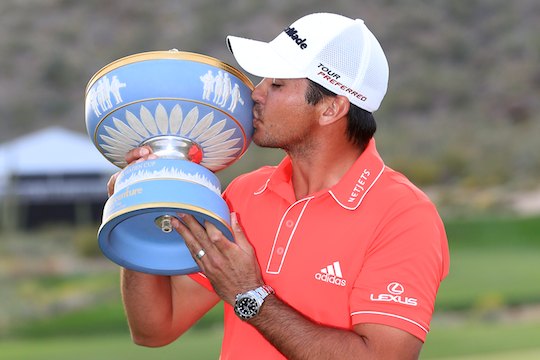 Day’s only previous win on the US PGA Tour was in the 2010 Byron Nelson Championship and Sunday’s victory pushes aside the run of near-misses in the Majors, including runner-up results in the 2011 Masters, 2011 US Open and 2013 US Open.

“For a second there, I didn’t think it was going to happen,” said Day.

“But I just stuck with it and I said, ‘How much do you want it?’. I kept on telling myself ‘I want it more than anything in the world’. I’m not going to stop until I achieve that. And I’ll find a way to win. I just stuck through it and it was tough for the match today between me and Vic. I’m glad I got it done.”

Winning major events for Day is and continues to be a work in progress. He’s not worried that a Major has not fallen his way even after been agonisingly close on three occasions. To him, time is and remains on his side.

“A career is very long in golf,” says Day.

“You see guys like Adam Scott, Justin Rose winning Major championships in their early 30s. You see guys winning in their 20s like Rory and Tiger. I think the biggest thing for myself is just to understand I’m not Rory. I’m not Tiger. I’m not Adam Scott. I’m not Justin Rose. I’m Jason Day. And I need to do the work and it will happen, I’ve just got to be patient.”

Day’s victory in the elite WGC series event earns him $US1.53 million ($1.7 million) in prize money and a three-year exemption on the US PGA Tour.

In the consolation match, Els birdied the 18th to extend his match with Fowler, but the 25-year-old American prevailed with a birdie at the first extra hole.