The man they dubbed the “Mad Scientist” has silenced more than a few critics with his brilliant six-shot victory at the US Open over Matthew Wolff.

Bryson DeChambeau fired a 3-under 67 to post the only round under par today and the only total under par the entire week after overnight leader Wolff missed a birdie putt on the final hole for a 5-over 75 and even par for the tournament.

“Oh my gosh, I can’t believe it!” said DeChambeau.

“It’s been a lot of hard work. On nine, that was the first time I thought ‘this could be a reality’. I shocked myself by making that eagle putt, but then I told myself ‘no’. Just play the next hole. I just had to keep focussed, making sure I was executing every shot to the best I possibly could.”

The 27-year-old joins a select group of just Jack Nicklaus and Tiger Woods to win the NCAA , US Amateur (2015) and US Open titles.

DeChambeau went into the final round at 3-under par and two shots off the pace set by Wolff following his superb 5-under 65 on Saturday. 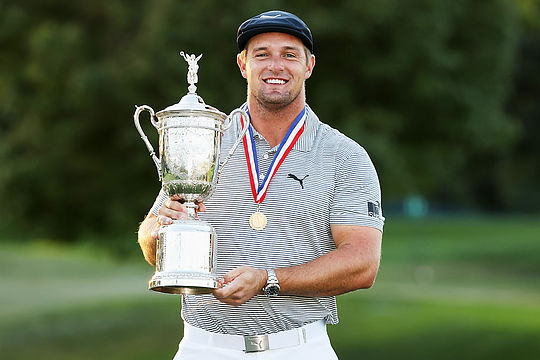 However, it wasn’t going to be Wolff’s day as the wheels fell off the 21-year-old’s round early with bogeys at the 3rd, 5th and 8th holes before an eagle at the 9th brought him back into the game.

Sadly, more bogeys followed at the 10th and 14th before a disastrous double-bogey sealed his fate at the 16th.

Pre-tournament favourite and World No.1 Dustin Johnson couldn’t recover from an opening round 73 and shared 6th place at 5-over the card.

In typical style DeChambeau went about winning in his own way. His critics said his game wouldn’t stand a chance at a course where keeping the ball on the fairway and out of the punishing rough was thought to be the only way to play Winged Foot West.

DeChambeau would have none of that, finding just 23 fairways all week including three on Saturday and six on Sunday to set an all-new record low by a US Open winner.

Even his peers thought his game wouldn’t survive this week.

“No chance. No chance. I don’t really know what to say because that’s just the complete opposite of what you think a U.S. Open champion does.”

“Whether that’s good or bad for the game, I don’t know. It’s kind of hard to really wrap my head around it,” said Rory McIlroy after his round on Sunday where he finished in a five-way share of 8th place.

DeChambeau’s swing, while not that pretty to watch, gets him the distance he craves and his reimagined body shape allows him to get out of trouble when he needs.

It’s easy to see a whole new generation of players coming through the ranks wanting to emulate the bulk and speed of DeChambeau or the eclectic swing of Wolff rather than the classic swings of Adam Scott or Rory McIlroy.

It wasn’t a great week for the Aussies with Lucas Herbert topping the billing in 31st place at 12-over with Adam Scott, Jason Day and Cameron Smith two shots back in equal 38th.

The next, and last, major of the year will be a long wait with the US Masters not due to kick off until 12th November where Tiger Woods will finally get to defend his historic 2019 win.

The 44-year-old will need to improve his game though with rounds of 73 and 77 seeing him miss the cut by four shots this week.