An eagle on the par-5 16th hole moved DeChambeau to 21-under, where he held off Patrick Cantlay by one shot. DeChambeau, who played on his first Ryder Cup team this fall, shot a 5-under 66 final round to snatch the victory in a impressive displace of precision golf.

Winning is certainly becoming a habit for DeChambeau. He moved to fifth in the FedExCup and the world rankings with his latest triumph.

“I was just coming out here to try to kick the rust off,” said DeChambeau. “I was able to play some great golf. I didn’t putt my best but I was still able to get it done. I’m pretty proud of that.” 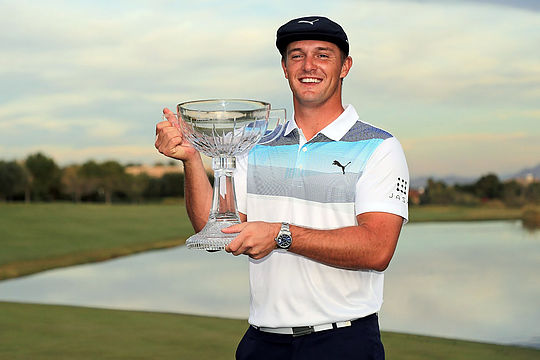 DeChambeau hit 14 of 18 greens in regulation during his final round and moved into the box seat after making a 30 metre eagle putt on the 16th. DeChambeau put on a masterful display of ball striking during his bogey free final round, confirming why he’s one of the hottest players currently on tour.

DeChambeau earned his first PGA Tour victory in his 40th start on Tour after capturing the 2017 John Deere Classic by a single stroke over Patrick Rodgers following a final round of 65.

In 2018, DeChambeau won the Memorial Tournament in Dublin, Ohio in a sudden-death playoff against Kyle Stanley and An Byeong-hun, after the trio finished regulation play tied at 15-under to kick start a remarkable 2018 for the 25-year-old.

PGA Tour wins since have included The Northern Trust, Dell Technologies Championship and Sunday’s victory at the Shriners which netted him a comfortable US$1,260,000 to bring his 2018 earnings to over US$9million.

Cantlay, attempting to defend his title after earning his first PGA Tour win here last year, finished second at 20-under after a final-round 6-under 65. He had three birdies and a bogey in his last four holes. Sam Ryder shot a bogey-free 9-under 62 to finish third at 19 under.

Rickie Fowler made a stunning Sunday charge but fell short of victory again, firing an 8-under 63 to finish in a share of 4th position at 17-under in his first start of the season.

“I really never thought I had a real shot. I needed a bit more to happen on the front nine there. But it was still fun to rattle off a few to start the back nine. There was a small chance. I had drivable par-4, 15th, and reachable par-5 to follow. I was going to need at least one eagle in there to kind of bump myself up the board,” said Fowler.

“I made some great swings. Played a good back nine. Definitely happy with the round today and looking forward to getting down to Mayakoba next week.”

Robert Streb and Abraham Ancer also finished at 17-under.

Cameron Davis was the best of the Australians firing all four rounds under par for the first time on the PGA Tour to record a top-30 finish with a share of 28th position at 11-under.

Matt Jones was the next placed Aussie in a share of 57th position at 6-under, with Rod Pampling a shot further back at 5-under. John Senden rounded out the Aussies who made the cut in 72nd position.

Curtis Luck missed the 3-under cut mark with a pair of 70′s to miss my one.