It was only a matter of time before the beefed up American Bryson DeChambeau took home another trophy and today was his day.

The 26-year-old posted a closing 7-under 65 to secure the Rocket Mortgage Classic in Detroit by three shots over Matthew Wolff at 23-under par.

Outside of his extraordinary length off the tee, DeChambeau has shown superb form this season, finishing outside of the top-10 just once at the Phoenix Open in February.

He narrowly missed a playoff at the Charles Schwab Challenge and finished outright second at the World Golf Championships-Mexico Championship.

Dubbed by the media as the “Mad Scientist”, DeChambeau has now won at least one title in each of the last four years with Sunday’s victory taking his tally to six PGA Tour wins. 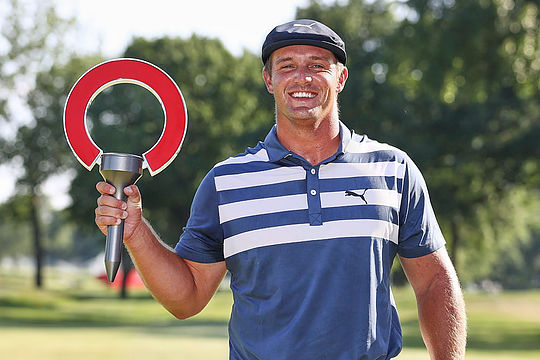 “This is a little emotional for me because I did do something a little different, I changed my body, changed my mindset in the game and I was able to accomplish a win while playing a completely different style of golf,” said DeChambeau.

“And it’s pretty amazing to see that and I hope it’s an inspiration to a lot of people that if they set their mind to it, you can accomplish it.”

“It just takes a lot of hard work, a lot of figuring out things that you may not know and understand yet, but if you keep going down the line…you’ll get a little bit better each and every day and hopefully that leads to something great in the end.”

Matthew Wolff has to be wondering what he needs to do to win. The 21-year-old fired off 30 birdies and an eagle this week and still finished three shots off the pace.

Wolff, who is well-known for his Jim Furyk-esque swing, played well all week but an uncharacteristic string of five bogeys early on today left him with too much work to do coming home.

“Yeah, it was definitely a grind out there. I didn’t start off really well at all, wasn’t hitting it how I was the beginning of the week, and feel like I was really getting some bad breaks as well, which was pretty unfortunate,” said Wolff.

Three-time PGA Tour winner Kevin Kisner fired a final round 66 to take outright third place with Danny Willett, Adam Hadwin, Tyrrell Hatton and Ryan Armour another two shots back in a share of 4th place on 16-under.

Rhein Gibson was the lone Australian to make the cut and finished in a share of 45th.

Jason Day’s woes continued missing the weekend action for the third time out of four tournaments since the return of the PGA Tour and joining Cameron Davis, Greg Chalmers, Matt Jones, Cameron Percy, Aaron Baddeley and John Senden joined Day on the sidelines.

The Tour now moves to Dublin, Ohio for the inaugural $6.2 million Workday Charity Open, which marks the start of a two-week stint at Jack Nicklaus’ Muirfield Golf Club with the Memorial Tournament following a week later, where Tiger Woods is expected to return for the first time since the lockdown was lifted.