He has been teasing the internet for months now about driving the 555-yard (508m) par-5, 6th hole at Bay Hill.

And so expectations were high as DeChambeau approached the 6th tee during the first round of the Arnold Palmer Invitational on Thursday, however, the conditions weren’t right and the 27-year-old made the wise decision to take the more conservative route with a lazy 309-yard (283m) drive over the water for an easy birdie.

Friday and Saturday also turned out to be a wash and so finally on Sunday the time had come to put his money where he mouth was and boy did he do that.

DeChambeau smashed his drive 370 yards (338m) across the water with his ball landing on the fairway and running into a bunker leaving him just 50 metres to the green.

Of course driving it over the water is one thing but you still have to get it in the hole and it took another three shots from there to record a birdie four…the same score recorded by his parter Lee Westwood with his 307-yard drive. 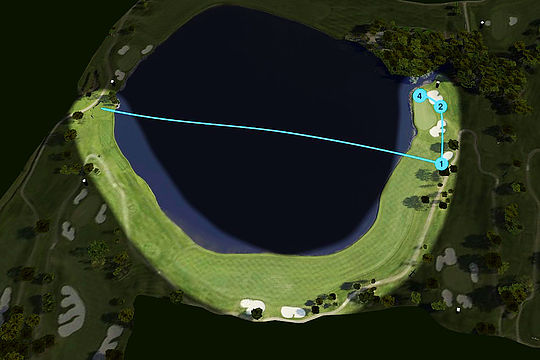 From there, “The Scientist” managed to keep one step ahead of the 47-year-old Westwood to claim his eighth PGA Tour title and second of the season following his US Open victory last September.

“For the most part, that’s a shot that I know I can do, and I was able to accomplish that,” said DeChambeau.

“I would have done it without the fans, but the fans definitely edged me on a little bit and it was fun to give them what they wanted.”

“It was amazing. It felt like I won a tournament there.”

And the all-important numbers?