The big fella is at it again and this time he’s blaming his equipment for an underwhelming trip around the tight fairways of Royal St George’s.

It was only last month when Bryson DeChambeau sat straight-faced in a press conference attributing his 44-shot meltdown over the final nine holes of the US Open to “bad luck”. 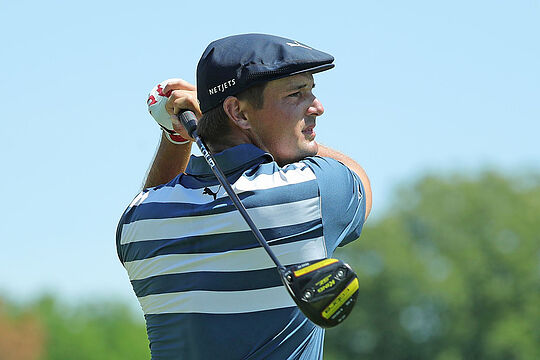 Two weeks later at the Rocket Mortgage Classic, where he was defending champion and a Rocket Mortgage spokesperson, the 27-year-old proceeded to snub the media all week after splitting with his caddie and missing the cut.

And now just a fortnight after that episode we have the big-hitter blaming his long-time equipment sponsor for his bad driving on day one of the Open Championship.

Thankfully it seems that Cobra weren’t going accept the criticism lying down and the-now ubiquitous social media apology was swiftly posted by DeChambeau.

It all began with DeChambeau speaking with the media following his 1-over 71.

The eight-time PGA Tour winner was asked about whether he was still happy with his round having only hit 4 out of 14 fairways but still managing to scramble to 71.

“If I can hit it down the middle of the fairway, that’s great, but with the driver right now, the driver sucks,” said DeChambeau in a clear swipe at his Cobra driver.

“It’s not a good face for me and we’re still trying to figure out how to make it good on the mis-hits. I’m living on the razor’s edge like I’ve told people for a long time.”

“When it’s in the middle of the fairway like I had it on 18, I was able to hit a nice shot to 11 feet and almost made birdie. If I can figure out how to make that driver how to go straight…it would be awesome. I just can’t figure it out.”

So if DeChambeau can hit the middle of the fairway each time, he’ll get a better result, well, no wonder he’s nicknamed The Scientist.

A few hours later and no doubt some terse words from the company that pays him a substantial amount of money to play their equipment and the following was posted to Instagram.

“My frustrations and emotions over the way I drove the ball today boiled over. I sucked today, not my equipment. Cobra and I have worked together for over five years and they are some of the hardest working people in golf industry and make an incredible product.”

“Their team is like family to me, especially Ben Schomin who has been there for me every step of the way since I started my career.”

“I deeply regret the words I used earlier. I am relentless in pursuit of improvement and perfection. Part of that causes me to become outwardly frustrated at times. With the new speeds I am obtaining, my game is a constant work in progress and so is controlling my emotions.”

And on the other side of the coin?

Cobra’s tour operations manager Ben Schomin summed it up nicely: “Everybody is bending over backwards [for him]. We’ve got multiple guys in R&D who are CAD’ing this and CAD-ing that, trying to get this and that into the pipeline faster. [He] knows it. It’s just really, really painful when he says something that stupid.

Hopefully the near 30-year-old can learn to control his emotions and he might just find himself in the winner’s circle more often than not.