The 25-year old had set himself the target ahead of the event in securing his first professional overseas win at Emirates Golf Club and the World No. 5 duly delivered posting a final round eagle, seven birdies and a single bogey to win with a new tournament record at 24-under par over England’s Matt Wallace.

“I’ve always dreamed of winning any Tour event, and to have this many under my belt, I don’t even know what I have right now,” DeChambeau said after his fourth win in his last nine starts.

“Being able to win internationally is something that I’ve always wanted to do after winning so many times in the States.”

The win makes amends for the disappointment last August in letting slip what would have been his first European Tour success at the Porsche European Open in Germany. 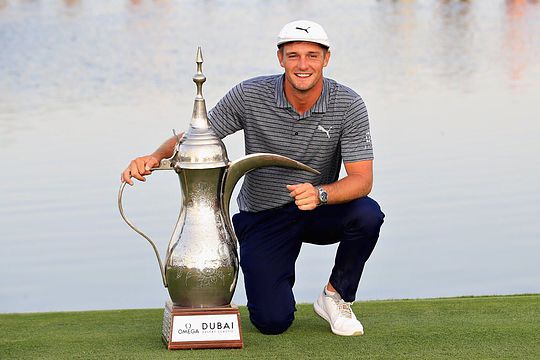 DeChambeau quickly distanced himself from his rivals with three birdies in his first three holes and increased his lead to six with an eagle on the 10th and a birdie on the 11th.

After making his only bogey of the day on the difficult par-4 12th, he added further birdies on the 13th, 14th and 17th to finish on eight-under par 64 for the day and 24-under for the four rounds, the lowest four-round total in the history of the tournament.

“Especially under the gun with the heat of some good players coming up and playing well from behind me, I knew I needed to step on the pedal and that’s what I did today,” DeChambeau said.

The previous biggest margin of victory was six by Ernie Els over Greg Norman in 1994. The old record for lowest tournament aggregate was set last year by Li Haotong (23-under par).

Despite rounds of 66, 66 and 68 on the first three days, DeChambeau kept insisting that he did not have his ‘A’ game. But he was delighted with his final round effort.

“Today, I was happy with my game,” he said. “I executed a lot of great shots. The first three days, I struggled with my game. Even though I played well and shot good numbers, I knew it wasn’t up to my calibre, and today was a good representation of what I can do.”

England’s Matt Wallace (68), the most successful player on the European Tour last season with three wins, made a stunning birdie after spraying his tee shot wide right into the waste area on the 18th, to break out of a logjam on 16-under par and finish solo second at 17-under par 271.

He is ranked 45th in the world and is expected to break the top 40 when the new rankings come out later today.

Wallace, who played with Ernie Els (71 – tied 13th), said his game on the final day wasn’t good enough to cause any concerns for the eventual champion.

Two more Englishmen, Ian Poulter and Paul Waring had set the target by finishing on 16-under par with rounds of 64.

They were later matched by 2017 champion Sergio Garcia (66) and 2011 winner Alvaro Quiros and the defending champion Li (71) of China to tie for third.

Lucas Herbert and Jason Scrivener showed their Australia Day spirit finishing in a tie for 7th place at 15-under. Herbert had earlier enjoyed a share of the lead following his second round 63, however a third round 72 slowed his momentum on moving day.