DeChambeau, who turns 25 on September 16th, stormed into the clubhouse lead finishing birdie, birdie and then landed his 237-yard second shot at the par-5 18th to within just two feet for a tap-in eagle in a round of 63 for a 12-under par tally.

DeChambeua will head into the final round one stroke behind surprise leader Mexico’s Abraham Ancer while Australia’s Cameron Smith continued his superb recent form to at sit at 11-under alongside Justin Rose in equal 4th place.

“I was little frustrated about 15 in taking bogey as I hit a really good putt, a fraction too hard, made a 360-degree lip on me. That’s golf. It’s going to happen.”

“But I was able to respond well. I think that’s the important thing.” 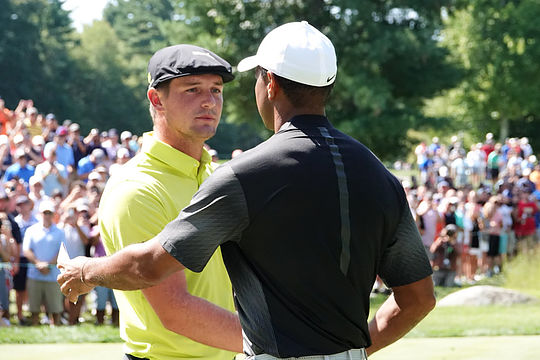 DeChambeau then birdied the sixth and seventh holes ahead of seven pars before sinking a fifth birdie at 14 before dropping a shot on 15 and finishing his closing three holes in four-under.

Admitting to some early nerves, the USA Ryder Cup rookie-elect was clearly comfortable in the company of Woods and could be observed often quizzing Woods throughout the 18 holes.

“Tiger’s my childhood idol,” said DeChambeau. “I’ve admired him my whole entire life. And to be finally able to play with him under tournament conditions, it was different.”

“I was a little nervous, for sure. But I was able to get out there and execute shots and worry about my game and focus on hitting the best shots possible. And I was able to play really well like that.”

Woods afterwards was full of praise for DeChambeau.

“Bryson was fantastic to play with,” said Woods.

“He’s great. This is the first time I’ve ever played with him in a tournament round. We played in practice rounds quite a bit this year.”

Woods was asked to comment on DeChambeau’s remark that if Woods and DeChambeau were to each make the USA Team, the pair could easily intimidate thier European rivals.

“If he goes around and shoots 8-under par every time, that will work,” Woods said smiling.