(Dublin, Ohio:) American Bryson DeChambeau celebrated wildly after holing a birdie putt to win the Memorial in a play-off at the Muirfield Village course in Dublin, Ohio.

The 24-year-old defeated Korean and fellow former US Amateur winner, Byeong Hun An, with a birdie at the second extra play-off hole for only the Californian’s second PGA Tour triumph.

And in the process of winning, DeChambeau declared his success as ‘validity’ he deserves his place on the PGA Tour.

DeChambeau, Byeong Hun An and Kyle Stanley ended regulation play tied on 15-under par but only after the two Americans, who were in the very last group, each bogeyed the final hole of regulation play.

Stanley, 30, was eliminated at the first play-off hole with his second straight bogey on the 18th, leaving DeChambeau and Byeong Hun An to continue. 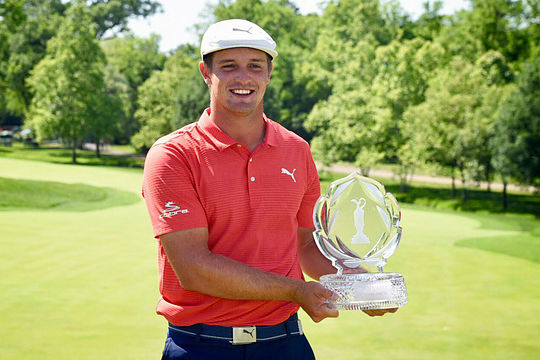 The Korean’s second shot on the second playoff hole came to rest against a spectator’s umbrella but An was afforded a ‘free’ drop which he took full advantage of by landing a superb wedge to just a few feet from the flag.

DeChambeau then ensured himself the biggest pay day of his short pro career in finding the bottom of the cup with his third shot to win with a birdie.

“To be able to win on Jack’s course is pretty special because when I came here a couple of years ago I wanted to win then but my game wasn’t near good enough to win,” he said.

“So, it has taken my a couple of years to get to this calibre and I was fortunate enough to come out victorious on Jack’s course and again, I will say it time and time again as this is most important win on my entire career because it happened here at Jack’s course and also it is also kind of validity me being out here on Tour, as well.”

“And if me being out here on the Tour and being able to get the job done, I know I can do it consistently.”

Byeong Hun An, who had burst onto the world stage after capturing the 2015 European Tour’s BMW PGA Championship, was gracious in defeat.

“I couldn’t do any better with the third shot at the second extra hole but then Bryson had a good birdie look,” he said.

“I knew he would make the birdie putt and that is why I tried to chip mine in, but then he hit a good putt, so I couldn’t do anything and Bryson is a good player.”

Chilean teenage sensation, Joaquin Niemann who went into the final round just one shot off the lead carded a closing 73 to share sixth place with Justin Rose (79) on 12-under par.

The effort has been good enough for the 19-year old, and in only his fifth Tour event since turning pro after this year’s Masters, to secure ‘Special Temporary’ Tour membership thus allowing him unlimited Tour starts for the remainder of the season ahead of full playing rights for the 2018/19 season.

“It was a really nice week. I just wanted to finish a little better in the last round, but it’s still a very nice, another top-10 for my career, so it feels really nice and I also hope to be back,” he said.

“I think I was supposed to finish 7th to secure temporary membership and I finished tied for sixth, so it was very nice to be temporary status this fast.”

Tiger Woods much-anticipated final round charge never materialised with Woods struggling with three inward half bogeys, including going out-of-bounds right at 13, on route to a round of 72 for a share of 23rd place at nine-under par.

“Well, I had some chances to shoot some good rounds this week,” he said.

“Overall my game is where it needs to be heading into the US Open and that’s something that’s very positive.”

Woods next event will be the June 14th commencing US Open and an event he’s won on three occasions but has not contested since 2015.

Just like Woods, Adam Scott’s final round charge failed to materialise. He carded a 1-over 73 do slip back into a tie for 35th place.

Jason Day also had a rough weekend, carding back to back rounds of 74 to end the tournament in equal 44th. Day had been well in contention on Thursday and Friday following opening rounds of 68.

Marc Leishman was the only other Aussie to make the cut in 62nd place.