Bryson DeChambeau has taken out the John Deere Classic in Illinois on Sunday and in the process has earnt a spot in this week’s Open Championship.

DeChambeau, a former US Amateur champion, sank a 8 metre birdie putt at the final hole to help clinch his first PGA Tour victory in style as he stormed home with six back-nine birdies to card 65 and finish at 18-under-par, one stroke ahead of fellow American Patrick Rodgers, who bogeyed the par-five 17th. 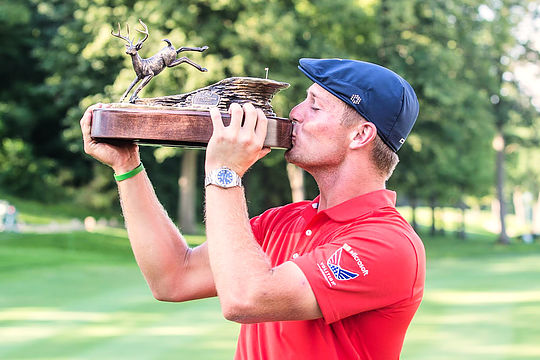 “I think that’s the true meaning behind what I try and do,” said DeChambeau.

DeChambeau, 23, is known for his revolutionary approach to the game. He plays with all of his irons the same length, which he believes is a mechanically superior approach.

“I have my unique approach to this game,” said DeChambeau.

“I was going through a process of understanding what is the most efficient way to hit the golf ball, to putt, for me, based on how I feel and how uncomfortable I am as well.”

“I knew I was comfortable hitting every kind of shot out here. It was just a matter of if I could hit it under the pressure. That’s all it was.”

DeChambeau played the front nine in even par, then birdied six of the final nine holes to move to the top of the leaderboard. DeChambeau became the 10th first-time winner on the PGA Tour this season.

DeChambeau becomes the 21st golfer to make the John Deere Classic his first win on Tour.

Rodgers, on the other hand, had four bogeys and his approach into the final hole sailed past the green. Rodgers nearly chipped in from 40 metres to force a playoff, narrowly missing the cup.

“Our tendency when you have the lead is to kind of hold on and play safe and guard against making mistakes,” said Rodgers, who remained winless on the PGA Tour. “But I had guys coming at me with some really low rounds. Obviously, Bryson shot a great one.”

Cameron Percy was the best of the Aussies securing a top-15 finish with a 13-par-total to secure a share of 12th position.

Steven Bowditch fired rounds of 75-76, to miss yet another weekend in what has been a dismal season.