Home-town heroes always get the biggest cheer and defending champion Cameron Davis can expect the same treatment when he returns home to defend his Australian Open title at The Lakes.

While his win may have been a surprise last year, Davis has since acquitted himself well in the British Open and also played well enough to secure a card on the US PGA Tour for the 2018-2019 season. 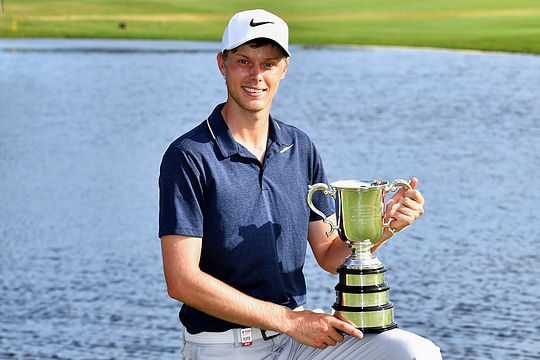 Still only 23, Davis knows The Lakes almost as well as he knows The Australian, where he won the title.

The former Roseville Golf Club pennants player is now out to become the first person since another Sydneysider Peter Lonard in 2004 to retain the Stonehaven Cup.

The quietly-spoken Davis will be in demand when he does come home as he is also planning to chase the Australian PGA Championship as well, when it is played from November 29 November-December 2 at RACV Royal Pines Resort on the Gold Coast.

Last year, Davis arrived at The Australian ranked No.1494 in the world; this time he hits town ranked inside the top 100 after a stunning first full year in the United States.

He began with limited status on the secondary Web.Com Tour, won the Nashville Open, finished top 40 on his major championship debut at The Open and then wrapped up his PGA Tour card with two 3rd placings in the Web playoffs.

“It has been a big year, that’s for sure,” said Davis.

“But I think like all the guys I’ve come through the ranks with, I’ve always put great importance on playing the big tournaments in the Australian summer and I can’t wait to get home and play the Open and PGA.”

“It meant the world to me to win the Stonehaven Cup last year and I’m honoured to come home and defend, but also to try to get my hands on the Kirkwood Cup on the Gold Coast, too.”

Davis – along with Greg Chalmers, Bob Shearer and Bruce Devlin – is one of just four players to win the Australian Open-Australian Amateur double since World War II.