Defending champ Day off to a solid start at PGA

Jason Day has started his defence strongly at the PGA Championship in Baltusrol firing a 2-under-par 68 to sit just three behind first round leader, American Jimmy Walker.

Day is currently in a tie for 8th position along with twelve other players including fellow Aussies Scott Hend and John Senden.

Starting on the 10th hole, Day grabbed a quick birdie on the 11th to make the turn at 1-under. Birdies on the 1st and 4th saw the world number one move to 3-under before a three putt on the 5th resulted in a bogey, the only blemish on his card.

With his late arrival at Baltusrol and just a single practice round yesterday, Day utilised his 3 wood for the majority of the holes averaging a driving distance of 288 metres, which paid off with a 57% driving accuracy percentage.

Overall, Day was pleased with his opening efforts. 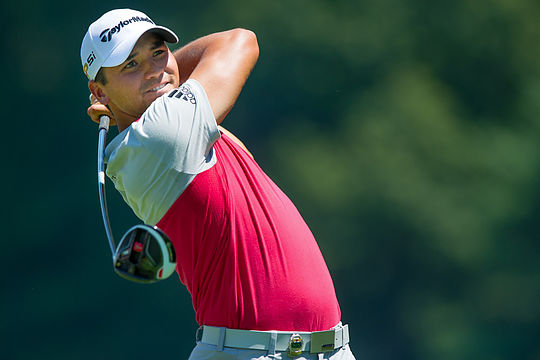 “Played good today. Drove it nicely and hit a lot of good iron shots. I just didn’t capitalise on the opportunities that I had out there.”

Winning major championships is hard. Successfully defending them is even harder. This would partly explain the game plan which Day took into the opening round, namely hitting fairways and greens, resulting in a 94% greens in regulation percentage.

“It’s probably a little bit more conservative than I usually am, just only because in major championships…you have got to be patient, take your opportunities when you can and work yourself up to the lead come Sunday.”

Day did what he needed to do over the first 18 holes. Taking the lead wasn’t the main objective. In fact, a first-round leader or co-leader hasn’t held on to win a PGA Championship since Phil Mickelson did it at this course back in 2005.

Yet there will be plenty of competition for Day. Each of the last 17 major winners are within five shots of the leader. There’s something about the majors which brings the cream to the top and we are again seeing the difference between the elite and the average tour journeyman.

Germany Martin Kaymer, winner at Whistling Straights in 2010, is dangerously positioned in a tie for second position at 4-under-par, along with England’s Ross Fisher and Argentine Emiliano Grillo.

Rickie Fowler, who has a strong record in the majors, is at 2-under as he goes in hunt of his breakthrough major title.

Of the other Aussies Aaron Baddeley fired an opening even par 70 to be in a share of 37th position along with Adam Scott.

Marcus Fraser and Marc Leishman is at 1-over in a share of 54th position. Greg Chalmers is at 2-over and Matt Jones is at 4-over.