Delay for Aussies at World Amateur

The Australian team of Cameron Smith, Daniel Nisbet and Matt Stieger got off to a slow start on their first practice day of the World Amateur Teams championship in Turkey.

A thunderstorm warning minutes before the Aussies designated practice tee time resulted in suspension of play and a return to the club house. Then the selection of Cameron Smith for a random drug test meant further delays. 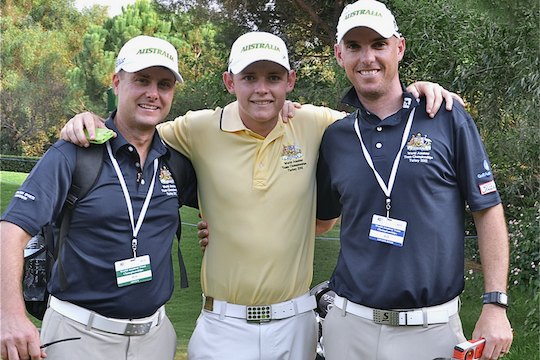 The Aussies prepare for the first practice day at the World Amateur Teams Championship in Turkey (Photo: Trefor Clayton)

The guys were keen to get out after the long flight and eventually squeezed in nine holes while Nisbet opted for the range and the gym.

There were some formalities with the International Golf Federation declaring that no team could use their own caddies for the event. The reasoning being to level the playing field between teams, as without doubt some teams could not meet the expense.

The alternate offered was local caddies. However, the women’s tournament demonstrated that there were simply not enough local caddies to meet the needs.

As a result it was announced that no caddies would be allowed at all for the event including practice rounds. That makes for even harder 4-day tournament given temperatures around 30 degrees. Certainly few players were happy with this about-face.

The Sultan course is immaculate. Prepared not only for this pinnacle of amateur events but also the Turkish Airlines sponsored World Golf Final between the world’s top 8 golfers commencing on the 9th October for a purse of $5.2m.